After upgrading to Linux Mint 19, all text characters are now shown as bracket boxes

As I'm preparing for a physical hardware upgrade, I first wanted to update my Operating System, including a newer Kernel for better hardware detection of the new hardware.

However after I upgraded my Linux Mint 18.3 to 19 (by following the the official upgrade guide using mintupgrade), I was quite surprised when everything which should include some kind of text, was not showing up correctly anymore:

Of course I made a backup before (using Timeshift and an additional full disk dump using dd) but I wanted to find out what is causing this, before actually restoring the system.

On my research why this could happen, I found a lot of hints however none of them worked. Until I finally came across a thread "All text replaced by boxes" in the Linux Mint forums. Unfortunately a detailed way to solve this was not shown in the thread, but the author mentioned the following:

A refresh of the font cache did it

Alright, next step: How does one manually refresh the font cache (I honestly didn't even know that existed!). This is when I found the article Refresh the cache of font directory.

As the console (I switched to TTY1 using [CTRL]+[ALT]+[F1]) still worked, I logged in there and used the command:

At this point I was hopeful but still in doubt that this would actually solve the problem. But by following the (verbose) output, something interesting happened: 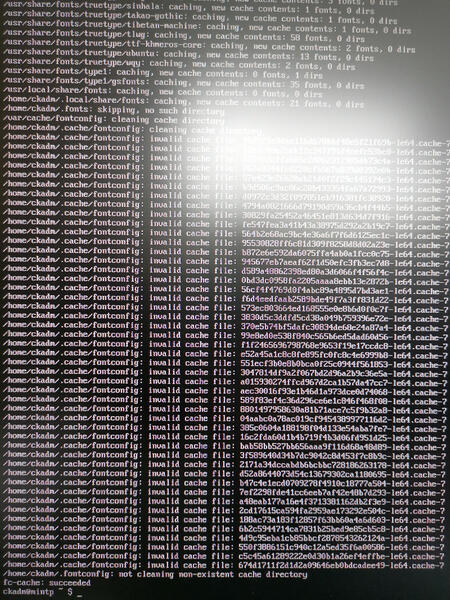 A lot of entries with "fontconfig: invalid cache file" showed up. Could an invalid font cache really be the reason for this?

After a machine reboot and then login, the issue (which turned out to be a font cache issue) was indeed solved and all characters were showing up correctly again!