As simple as UCS might look from the outside, the configuration is a piece of hell! 6 tabs (Equipment, Servers, LAN, SAN, VM, Admin) where each contains a lot of different settings show up - and in the first few minutes you look puzzled at all the names like Service Profiles, Policies, Pools...

After some time of configuration with an expert, the settings - where to configure what - is now kinda 'ok'. Meaning, I now know the most important configuration stuff.

But: The whole chassis and therefore all the blade servers are not connected to ethernet. It seems that the uplink (a configured port-channel) doesn't work. The following error message proves it:

The funny thing is, that even in the official documentation the screenshot shows error messages. Take a look at this: 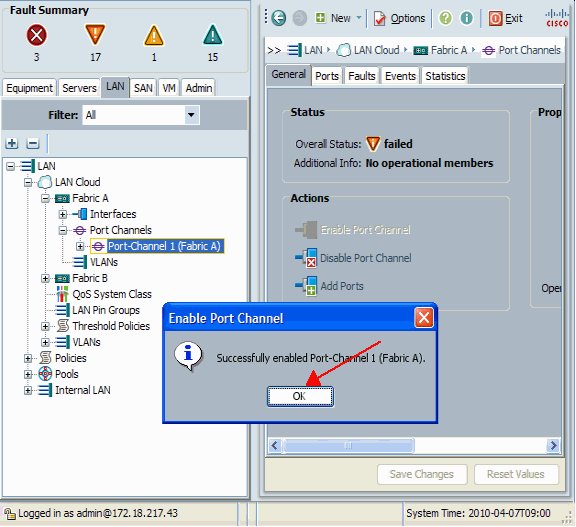 Cisco states here: 'As shown, the port channel that was created is successfully enabled.'. Even though there are errors shown that the port-channel has no operational members. As of now, our UCS is still down... and no solution could be found so far.

Thanks to Fabien to have found this "faulty" Cisco documentation :-).

Update 12:27: The ethernet issue has been fixed. It was due to the protocol which was used for the port-channel between an ethernet switch and the UCS Fabrics. It was decided to use the LACP protocol which now solved the problem.

Hmm.. I guess we both can agree that the Cisco documentation misses a lot of important information. Let me know about your 'fight' :)

Our setup is the same.

During our test, I saw the status of port channel \"up\", but the information \"No Operational member\" was always present.

I would do another test this week.

On the Nexus side we only specified the ports which should be used for the port channel. No further configuration was done on UCS side. On our main switch (a Cisco 3750) we defined the port-channel like seen in my previous comment. The Nexus switches are connected kinda like this:

So its important that the port-channel was defined in the same switch (Cisco 3750 in our case). But I guess you already have done that, too?

hello, thank you for your prompt response.

Even with "active mode" enabled, it does not work.
Our two Fabric Interconnect are connected to two Nexus 5000 (in VPC mode ).
Each FI connected to both N5000.

FI cluster is in "end host" mode but we also tried to switch mode, without results.

If you have an idea, do not hesitate to let me know.

Actually it's the channel-group mode which you have to set to active on an interface:

Important is that you use mode active for both ports of the port-channel.

Hello, we have the same problem with port channel between UCS Fabric Interconnect and Nexus 5000.
What is the LACP mode configure on the Ethernet Switch?
Thanks