Ubuntu distribution upgrades, for example from 18.04 Bionic to 20.04 Focal, are most of the times pretty painless. Sure, there are sometimes a couple of major software upgrades which require configuration adjustments, but in general the upgraded system should boot.

EC2 not booting after dist-upgrade

On AWS however the story is a little different. In the past few weeks, a bunch of EC2 instances needed to be upgraded from Ubuntu 18.04 to 20.04 - yet three out of four (that's 3/4) machines did not come back up after a final reboot! The instance screenshot would show that the machine landed in grub rescue: 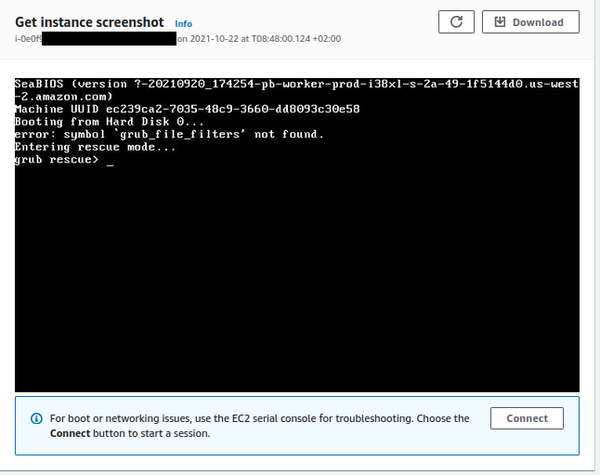 During the latest dist-upgrade of yet another EC2 instance, something different happened towards the end of the upgrade: Grub asked on which disk to be installed. It offered two disks: /dev/nvme0n1 and /dev/nvme1n1.

This and all the other EC2 instances, previously upgraded, have the same configuration: A primary disk (EBS) and a secondary disk (EBS), dedicated for containers and mounted on /var/lib/docker.

Of course I went with the default choice, to install grub on the first disk, /dev/nvme0n1. But - big surprise - that didn't work:

With the dist-upgrade done and with the machine still up, the NVMe disks are verified:

So here we have the two NVMe drives. But which one is which?

Oh? There is no boot partition on this drive. And it's a 50GB drive - that means that this is the secondary EBS disk!

Let's check out the, according to this machine, second NVMe drive:

Here we go; this is our primary EBS disk of 30 GB with the boot partition.

So the actual boot device is /dev/nvme1n1, not /dev/nvme0n1! Turns out the EC2 machine turned the ordering of the drives around - resulting in a grub install on the wrong device on an automated dist-upgrade.

To fix this, the Grub boot loader can be installed manually on the correct (boot) device - which is /dev/nvme1n1 in this situation:

The EC2 instance can now be rebooted and the machine comes back up again.