Currently I'm in the middle of a server-migration where it was decided to upgrade existing hardware (Dell PowerEdge 2950). All of the target servers already have 2 physical processors (quad-core) and additional memory was bought, to fill them up to the max. The operating system will be VMware ESXi. To have a maximum VM's running in the hosts, hard disks should be upgraded as well. On my "online shopping tour" on the Dell website I found an interesting newcomer, a 600GB 15k SAS hard drive available now. And they are now starting to be of service as you can see in the photos: 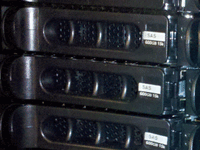 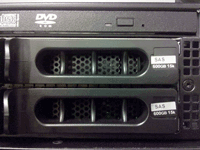 Of course, there is one small problem left: ESXi's disk limitation (as soon as ESXi setup has to handle a virtual drive bigger > 2TB, the setup messes up the vmfs partitions). With such PowerEdge 2950, 6 slots of hard drives and a configuration of RAID-5 this gives a total of ~2.86TB. But as I already wrote in this tutorial (VMware ESXi 4.1 does not use whole disk capacity for VMFS3), this just requires a bit of time, focus and concentration to solve it manually.