Previously my own anti spam mail server solution has been replaced by Ironport, an all-in-the-box-anti-spam-appliance. It doesn't look bad, it makes its job and its easier to administrate than postfix, amavis, spamassassin, etc. But... it costs much much more. So does that mean it fights spam better?

As soon as the MX entries were switched, I compared the amount of incoming spams on two public folders (shared mailboxes). The e-mail addresses of these mailboxes are shown on the Internet, so they get a lot of spam. But with which anti-spam-solution will there be more spam?

Take a look at the following graphical statistics (the day of the switch was July 29): 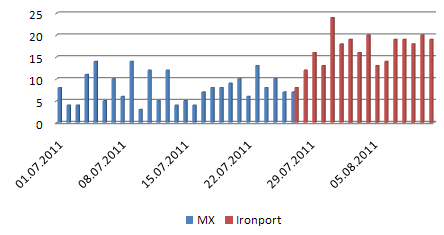 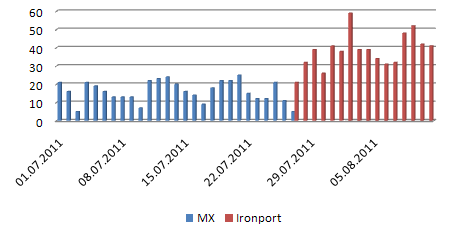 However be careful with this comparison. If you want to use Open Source as your anti-spam mail gateway, you sure need to know what you're doing, how to install, configure and bundle all the different elements together. But if the right knowledge is there, one can easily beat anti spam appliances.

Yes, I totally agree with you on this one. It would be nice if you could or maybe you have, article on how to setup good open source anti-spam solution, from your personal experience?