Since yesterday I'm enjoying a new way of working with two 24 inch HP ZR2440w screens, connected to a NVIDIA Quadro NVS 295. Sitting in front of them right now, I call it my command central.

It's actually the first time that I'm using a graphics card with DisplayPort interfaces, supposedly the new standard in digital video interfaces (replaces DVI). The HP screens accept this cable and the motherboard accepts the PCI Express x16 graphics card. But will openSuSE (12.1) accept the new card without installing anything?

The card comes bundled with two DualPort to DVI Adapters

Once the card was installed, I booted the computer. After grub showed up and openSuSE intended to boot, a warning was shown immediately, that the previously selected display resolution does not exist. After manually selecting a new resolution (by hitting space and then select another resolution) I thought it would boot now. But nope. The motherboard made a quick "beep" and the displays went to sleep. Just to make sure, I repeated this a couple of times. But everytime openSuSE/Linux started to boot, the screens went off. Yep, that does sound like missing drivers.

openSuSE (and other Linux distributions as well) has a special way to handle non-OpenSource-drivers. They're by default not included in the repositories, therefore by default not installed. NVIDIA writes drivers for Linux systems (pretty good ones, too) but their sources are not published, therefore they're not Open Source drivers.

Luckily there's a Failsafe with every installation of openSuSE. When I selected Failsafe from the grub menu and booted into it, I was very surprised: I was not only in text mode as I expected, no, the full init 5 graphical mode with KDE and everything showed up. Sure, the graphics were not sharp, the resolution was messy, the second screen didn't work but what the hell, it booted with graphics. I would have already been happy with the text mode.

Back to the NVIDIA driver topic. OpenSuSE has it's own Wiki entry how to install NVIDIA drivers: http://en.opensuse.org/SDB:NVIDIA_drivers#The_repository_way.  It pretty much explains everything, except which driver to install for a Quadro card. I decided to go the try'n'err way to figure it out. This is what I did:

Now this is the big question, which driver should be used for NVS cards? As I wrote above, I just tried the driver for the newest cards (GeForce 6).

After the successful installation I rebooted the machine and voilà, my displays were working fine and sharp ! 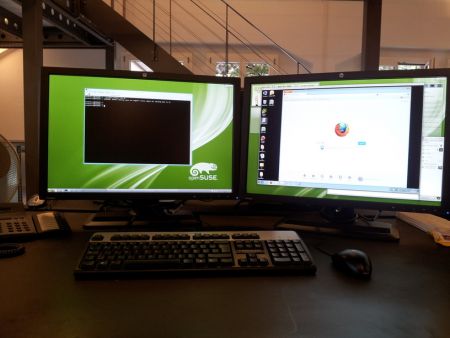