The search for the perfect Audio Player on Linux

For a while now I have been looking for a good audio player on my openSuse 12 machine. I've always been a Winamp enthusiast because of it being a simple player with a lot of functions in the background. But unfortunately there is no offiical Winamp for Linux release... So the search began.

First I tried it with Amarok, which looks like the default media player in openSuse. Although it looks powerful and manages playlists, songs, inventory, etc. it is simply too big of an application. Furthermore it tries to connect to external services like Amazon which I simply do not need and do not want.

As an alternative I started using Banshee, another audio player in the openSuse repository. It is much lighter than Amarok but still has a large interface and shows "Online Media" like Amazon and Last.fm. Is it so hard to just have a tiny interface playing what you've just added into the playlist like in Winamp? At that point I decided to continue Banshee until I find something better.

The day has come.

On my colleagues computer (running Ubuntu) I saw an audio player with a very similar design to Winamp. He told me it's the "Audacious" player. My target was set. This player however is not in the official repositories... so no chance to add the player with zypper. I tried to install it manually. I downloaded the latest Alpha release from the project website and launched the compile process.

At that point I got two missing libraries, Audacious was looking for: PANGO and GTK. I could install them with zypper:

After the configure part went through, I launched:

and in theory that should have been all. But the player refused to start up, although it appeared in the "Search results":

A click on the icon was just bouncing the logo next to the mouse cursor - no error message was shown or logged.

By chance I found a forum entry somewhere referring to the packman repository. This is an additional repository for openSuse which adds a lot of packages. So let's give packman a shot by adding the repositories and looking for audacious:

Yay! Audacious is there! Install right away!

Alright! The player has been installed from the repository. But I've been there so far already. Will the player now start?
Nope.. it won't. Same happened by clicking on the icon in the "Search" but I got the following error trying to launch the player from the cmd line:

Hmm... plugin? In the zypper search I've seen some entries with plugins. Let's try that:

The problem simply explained: The required package libavutil51 is newer in the packman repository than in the offiical openSuse repos. I decided for solution 1 (to replace libavutil51 with a newer version). After that the installation went through and updated the package.

Another check, what is actually installed now:

And now, finally the player started up: 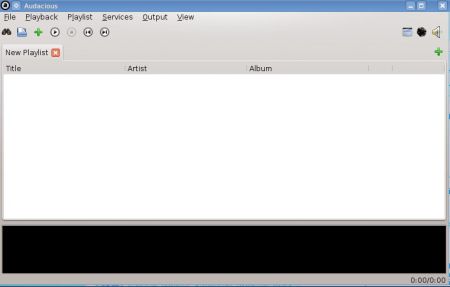 Looks pretty ugly, doesn't it? Luckily there's the "Winamp Classic Interface" choice under View->Interface. Which looks like this: 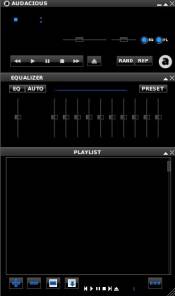