In an article from March 2012 (Install CyanogenMod 9 (Android 4.0 Ice Cream Sandwich) on Samsung Galaxy S2) I wrote how CM 9 (Ice Cream Sandwich) could be installed on a Samsung Galaxy S2 (GT-I9100) phone, running with the stock (original) Android version from Samsung. Meanwhile its more than a year later and CyanogenMod 10.1 is available for the Galaxy S2 (not stable, nightly versions). Time to upgrade! The following steps explain how.

First of all, if you already have CyanogenMod 9 or 10 installed, the upgrade is pretty simple. If you're still running the original Samsung version of Android, you risk to brick your phone due to the so-called "emmc superbrick bug". I'd suggest to follow my installation steps to install CM 9 first.

Step by step guide how to upgrade your Samsung Galaxy S2 (GT-i9100) from CyanogenMod 9 to CyanogenMod 10.1

First some screenshots of my phone's version before the upgrade: 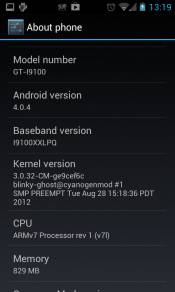 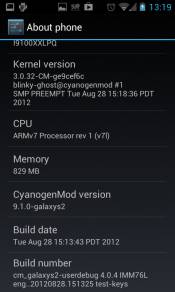 1. Download latest CM 10.1  (currently nightly versions) for i9100 from http://download.cyanogenmod.org/?device=i9100  and save it on the external SD card in folder cm10 (create the folder).

2. Download Google Apps for CM 10.1 from http://goo.im/gapps and save it on the external SD card in folder cm10.

Note: Be aware that all your user-data will be removed! 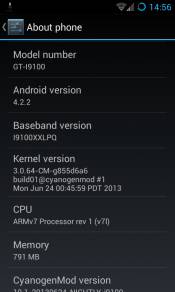 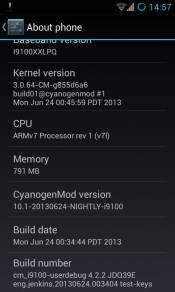