With the release of the new Gen8 servers (they're not called G8 - because this combination means bad luck to Chinese HP customers...), HP also introduced the "Intelligent Provisioning" system.

The goal of it should be to make it easier (when was it difficult?) to set up a new server. One of the "big features" of Intelligent Provisioning is the online firmware upgrade. The server just needs to be connected to Internet and it will look for new firmware versions on the HP website. But as it turns out, everything is now much slower. And more stupid.

Out of six new firmware updates found (which took more than 30 minutes), four of them were actually the same version already installed or worse the installed version was newer than the one found online (huh?!): 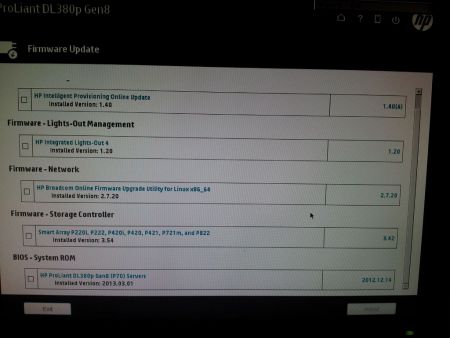 Maybe HP needs to learn about the basic if clause "X > Y" before suggesting to install older firmware versions.