Is it already Christmas? Yes, it is. And I've chosen to take the mainstream road and bought myself a tablet (Sony Xperia Z LTE) and a physical keyboard. Goal of the package: Flexible work from everywhere.

Most of my remote work is on the console through SSH so I don't require a mouse to do my work (that's for the Windows click-admins). But I have to admit that a mouse comes in handy when browsing the web, e.g. searching for howtos. Well let's try it out. 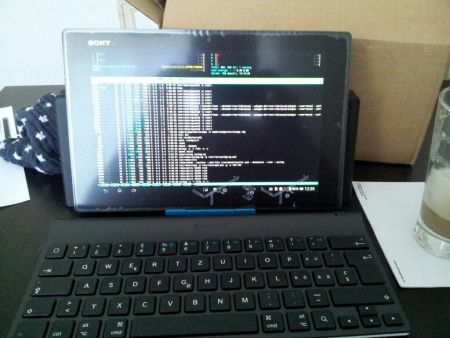 As you see in the picture above, I have bought a Logitech Tablet Keyboard (for iPad), although my Sony Xperia Z is running Android. One of the customer reviews from the webshop I bought the keyboard stated that it works fine on Android, too. Yes, it does. But there are a few downsides when it comes to SSH work. I'll mention that later.

The most positive thing is... the weight. The tablet and the keyboard together still weight not even half the weight of a modern notebook. They're small and fit into a small bag (a notebook case is already too big). Because I took the LTE version of the tablet, I can enter a SIM card and therefore have mobile Internet everywhere. Only some notebooks offer that (and you pay a higher price, too).

My first impression
It's definitely a big difference in how to work. Actually I have to admit, I couldn't work a full day like this - except in emergency situations. On the road and for quick (emergency) access it's great though. The switch between the different (open) applications can be done as in other OS with Alt+Tab. That's quick and easy and every admin is used to that. Occasionally I have to touch the screen to quicker click into a form in the browser or to go into the settings of an application, but that's ok.

Console: I can't find the key!
Now once in the console I found myself searching for the correct shortcut on the physical keyboard. Without keyboard I always used the soft keyboard "Hacker's keyboard" but here I am with a physical keyboard. Here are some free and helpful hints for you if you use a Swiss-German layout and you don't want to spend several hours in total to try'n'err:

The pipe character ( | ): Being used from "real" desktop keyboard, the pipe key is created with AltGr+7 (or Ctrl+Alt+7). Well the AltrGr key doesn't exist and Ctrl+Alt+7 doesn't bring up the pipe (nothing appears actually). To get the pipe, you use only the "alt" key on the right side of the space and 7 (alt+7).

ESC: When I'm in the insert mode in vim, I need the Escape-key to leave the insert mode. But the ESC key on the Logitech Tablet Keyboard is just a square which is used as Home-Button. It took me a whole while to figure this out myself - because nowhere in the Internet this is documented: Use the blue fn-key and the home-button to use it as ESC-key (fn+HomeButton).

Ctrl+C: I don't mean the Copy function - this actually works very good. In this case I mean the Ctrl+C on the console, e.g. to stop a ping command.
Update May 28, 2014: Actually this is quite simple. Just don't press CTRL+C at the same time but first Press CTRL and then followed by C. This will appear as ^C in VX ConnectBot and therefore stop your ping other any other command you are running.

I will update this article in the future, as soon as I come across other "challenges". Until then: Merry Christmas to everyone!

thanks so much ! that stuff nearly made me crazy, i mean ctrl-c offering to copy instead of breaking pipes. just ctrl .. a little pause.. and ceeee :))