The "Windows phone scams" are nothing new to the insiders of IT. I even know a person who got successfully scammed, obviously not an IT pro. But whether the scammers call IT aware people or just Internet users, the scamming is mean and criminal.

A few days ago, I got such a call from an American number. It all started with "I am calling you from Microsoft Windows support. Your computer has a virus." That sentence was enough that I knew this was the famous phone scam.

I quickly installed a voice recording app and recorded the phone conversation. The very beginning is missing but the most important part is there. The conversation can be found on Youtube on the following link: 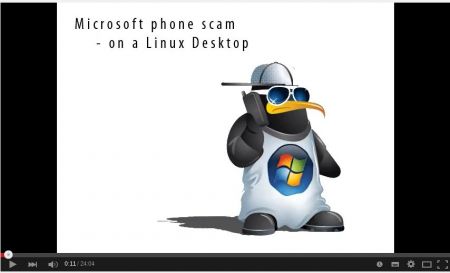 During the call I had to improvise (because I wasn't actually sitting at a computer) but I had two goals:

1) Stall the callers and let them waste time with me. The more time they waste on me, the less they can scam other people.
2) Find out how they react if the target (the user) is running a Linux computer.

Funnily I gave enough hints during the call, that my system is a Linux computer, but they were all ignored - until the very end. But listen for yourself.