How to play Age of Empires (AoE) Multiplayer in 2015

Two weeks ago my brother sent me the following meme featuring pope Francis: 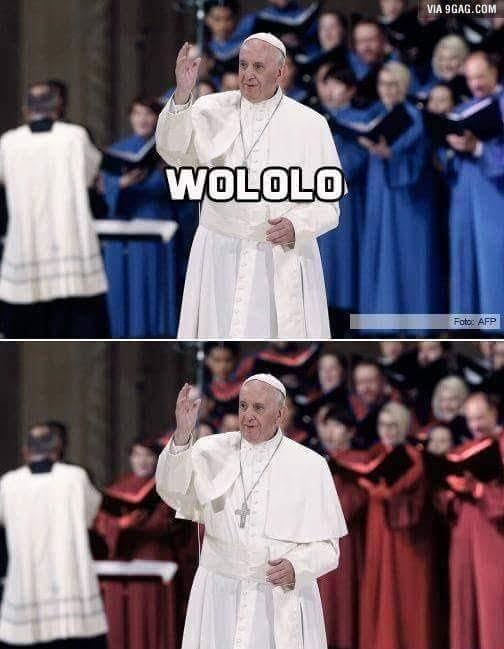 It took me a while but when I read "wololo" out loud, all of a sudden everything made sense. I won't explain the joke here. If you don't get it, that means you have never played Age of Empires.

But I didn't just stick with the meme. It somehow got me wanting to play Age of Empires again. The original AoE (I). As a owner of the original disc (yes, back then you went into a store and bought the game in a carton box) I grabbed it out of a box somewhere in my office room. My collegue and I decided to give it a shot in our lunch break. Turns out, that's easier said than done!

Let's play Age of Empires on Windows 7!
The installation runs smoothly and without error. Quite surprising actually given the release year of AoE was 1997! And wow, how this puts back memories when the installer is running. The whole game takes enormous 250MB! I remember that back then I needed to clean up space in order to install AoE. Today you just laugh.
Once the game was installed, it correctly started up (however on today's big screens it is pixelated but that's no surprise) and we launched the multiplayer mode. We created the game and my colleague found and joined it. Cool! We're playing AoE as if it were the late 90's!
But then it started: After a couple of minutes the multiplayer game ended abrutly, indicating that a "synchronization error" has occurred and the game was stopped. Frustrating, especially because you cannot save a multiplayer game!
We tried it a couple of times again, but we always hit the same problem. Sometimes after 4 minutes, sometimes after 9, but it was always the same problem.

Let's install a Win XP VM and play AoE in it!
My colleague and I both use VMware Workstation, therefore it was an easy task to set up two Windows XP VM's in NAT mode. Or at least I thought that way. The installation of Win XP (without any service pack) works but then try to download and install the Service Packs from somewhere. The only browser on the system is IE6 and almost no websites work. And if you try to download the Service Packs from the official microsoft.com website, the http response page just says something like "it's time to upgrade your OS". FU! At the end I downloaded the Service Packs on my normal Win7 workstation and copied them into the VM.
So now that the Windows XP VM is ready, we installed and launched AoE in it. Started up the Multiplayer mode and ... couldn't find the created game.

OK, let's use Hamachi to create VPN between our Win XP VM's!
I've heard of Hamachi already quite while ago. Now it was the time to test it. After a quite painful installation and register process (because of disabled TLS setting in IE6 and generally IE6 being a too old browser), we got Hamachi working and were able to create a multiplayer game and the other player joined. Hurray! It wo.o.r....ke......d. The VPN connection made the game so laggy, even with just 3 civilians, the game stuttered in front of us. After not even one minute we closed the game as it was unplayable.

Back to Windows 7 with patch 1.0c!
While we were cussing about Hamachi and the game lagging too much, my colleague remembered that there were patches for AoE. Luckily we found them on http://aoe.heavengames.com/dl-php/lister.php?category=patches. When using the original CD, the game's version is at 1.0a. The patch 1.0c obviously fixes a lot of bugs and also improves multiplayer connectivity. So we installed the 1.0c patch and launched the game again. And for once we didn't get kicked out and played happily for around 39 minutes - until we got kicked out seeing the synchronisation error again.

Switch VM's network settings to Bridge Mode!
The last try with patch 1.0c on Windows 7 definitely showed us: The game (in multiplayer mode) just doesn't work correctly on Windows 7. Maybe the tcp handling has changed a lot and the game is not able to handle this. While I was making tcp connection tests within the VM we (finally) realised that in NAT mode the VM is in its own virtual LAN. So either the host needs a port forwarding for the listening port of AoE (whatever this port would be...) or the VM itself must not be natted but must connect directly to the "real" network. This can be done in VMware Workstation by changing the network settings to use a bridged network connection: 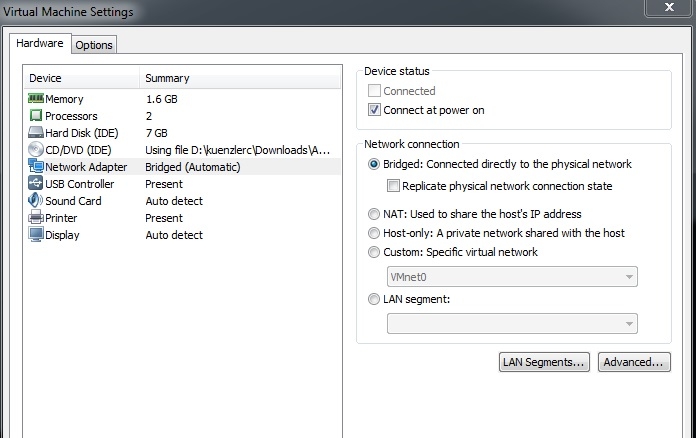 The VM now got a DHCP address from the real network and we were able to ping each other's VM's.
Time to open another multiplayer game. The game immediately found the already opened game on the other VM and the game started...

We've played for quite a while without being kicked out of the game. Success!

Sum it all up!
If you want to play the original Age of Empires from 1997 on today's computers and operating systems, you should install a Windows XP VM, use bridged mode (to simulate the VM being in the real network) and then play the game inside the VM.

I tested it with my brother, and it works!
Thanks for your tutorial! We use VirtualBox 5.2, which can use bridged net connection as you mentioned.