Developing and testing applications sometimes require you to go the "non-standard" way. A good example is when you have a web-application which has a mail function. The mails must correctly be sent but remember, this is just a test of the application and you don't want your users to get spammed with test mails.

A fake/dummy mail server comes in handy. A developer suggested MailCatcher, which looked good to me except that it's written in ruby and depends on gems which I didn't want to put on this system. At least not if I find something easier...

Then I came across Dummy-SMTP, a simple listener written in python (so no additional software to be installed on my Ubuntu test servers) just saving all the received mails as text files in a folder.
By default, Dummy-SMTP runs on port 25 which requires root privileges to start with and it also must be started from within the correct folder. I made some modifications for the following purposes:

In my case, I defined the listener port to be 1025 and defined an absolute path: /srv/Dummy-SMTP which I chose where to run the listener.
To install Dummy-SMTP either clone the original repository or my forked one:

Once the repository was cloned, become "appuser" if you aren't already and launch the listen.py file:

Now I adapted the Postfix installation and defined that all mails should be relayed to this fake smtp server by setting the relayhost parameter:

From now on a mail sent from this server should be relayed to the dummy smtp server and be just stored as a text file in /srv/Dummy-SMTP/mails. Let's try this:

And let's check out the Dummy SMTP mail folder:

The above mentioned Ruby alternative Mailcatcher has one nice feature though: The mails can be seen by browser. Well, this isn't very complicated either. The mail folder of the dummy smtp server is a given (/srv/Dummy-SMTP/mails) so by creating a simple "Alias" on the Apache running already on this test server, I was able to display all sent mails on the browser, too:

Nothing fancy of course, but it works: 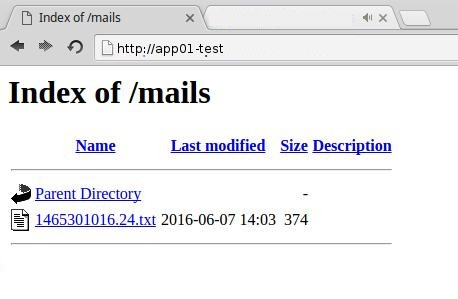