Downgrade Mac OS X on a new iMac? Forget about it!

Imagine you're buying a new house. You want to move in but you realize that all your chairs, tables, beds and even your multimedia stuff is not compatible with the new house. Sounds stupid? It does. That's exactly what happened last week with a new iMac 27 inch.

My dad's office runs Apple computers since the 80's. Even when Apple almost disappeared he staid loyal to Apple. Although he's been using the Macintosh for almost three decades, he never became an Apple-hipster. I've never seen him driving around with a Mac bumper-sticker. Anyways, back to the story.

Last week an iMac 27 inch bought in 2009 broke down. Most likely the graphics card got defect. He asked me for his help and I looked up some tutorials and videos how to replace a graphics card in this iMac 2009. Holy sh*t! That's not just a simple replacement as you'd do in a tower computer; that's pulling apart the whole damn computer. I'm not at all experienced in opening and replacing iMac parts, so I suggested to buy a new iMac.

Once the new iMac was configured (with Mac OS 10.11 El Capitan) we've hit two problems already:
1) The software for creating and drawing construction plans (essential for the office) is not officially compatible with El Capitan
2) The plotter printer (Canon ipf 710) has no drivers for El Capitan According to Canon, the latest available driver for this ipf 710 printer was Mac OS 10.9 Mavericks.

So we decided to go back to this version (Mavericks). I created a USB drive with the Mavericks setup on it and was able to select the USB drive after booting with the Alt-key pressed. But then, just an icon "forbidden" appeared.

I tried the same with the original Mac OS 10.6 CD's which were still lying around in the office. Because the new iMac doesn't have a DVD-Drive anymore, I first needed to create a dmg image from the CD and from the dmg created an iso (using dmg2iso on Linux) to then create a bootable USB drive with the 10.6 image. This took quite a while but when it was finally finished, I tried to boot from this new USB drive. This time the Apple icon appeared - but nothing more. I let it keep like this for around 10 minutes, but nothing happened.

Finally I discovered the following page on Apple's website: https://support.apple.com/en-us/HT201686. This page says as of today (November 20 2016):

Use the Mac operating system that came with your Mac, or a compatible newer version
Your Mac is designed to work only with compatible macOS versions and builds. If you try to use an incompatible version or build, your Mac might behave unexpectedly. If you copy older system files from another computer to your Mac, or try to use startup disks designed for older computers, you might experience one or more of the following symptoms:
- Your Mac doesn't start up, or you see a prohibitory symbol at startup.
- You see a message that you're using an unsupported or incorrect version of the Mac operating system.
- Your Mac doesn't respond to your trackpad, mouse, or keyboard.
- Apps unexpectedly quit.
- Your Mac doesn't sleep or wake.
- You don't hear any sound from your Mac.
- The fans in your Mac operate at a faster or louder speed.
- The image on your display appears to shrink, has black bars around it, or appears tinted.
- You can't use Bluetooth or Wi-Fi.

Therefore the forbidden sign I saw on the Mavericks setup must be that mentioned "prohibitory symbol" then. Because the newly bought iMac has some time limited Apple support, I decided to call Apple and get a verification on that. And indeed, the technical supporter confirmed to me (after checking herself for a couple of minutes) that an iMac must run at least the version which was factory-installed. No downgrades.

Interestingly this is against the requirements of the Mac OS itself, because if you look up the system requirements for OS X Mavericks, it only says "iMac (Mid-2007 or later". Which, in this case, should also work for iMac's bought in 2016. 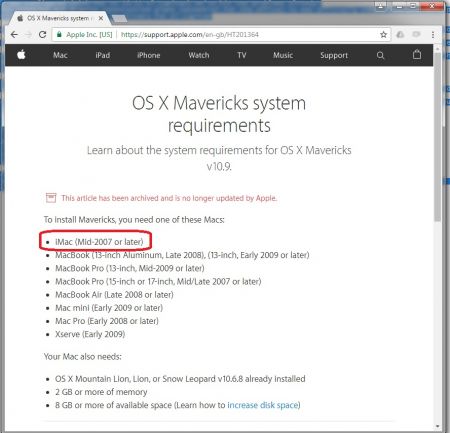 So much for the "or newer" part. Doesn't seem to be an unlimited newer than.

After the failure of trying to install Mavericks and Snow Leopard on the 2016 iMac, we decided to return the newly bought iMac and find somewhere a used iMac from 2011 (which we found on Revendo.ch). The guys in the shop in Zurich were most helpful and installed Mavericks from their PXE-boot environment.

It's crazy though that you buy a new iMac and can't use your existing Mac OS (for whichever reason you prefer the old version). Which made my dad for the first time in over 20 years angry about Apple.