Lessons learned: Do not put stateful Minio into a Docker container 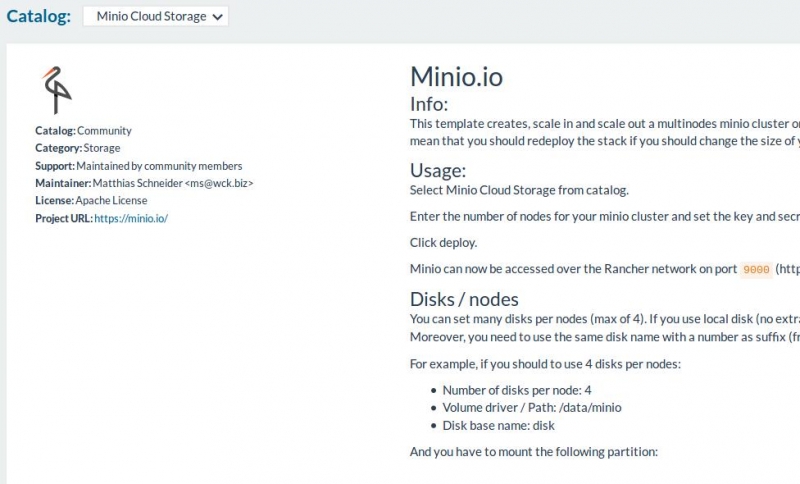 We decided to go for it - it's a playground environment and in the worst case we'll begin from scratch again.

At first everything seemed to work fine. The containers started up and by using their internal Docker IP addresses, Minio was launched on each container (on four containers, spread on four physical hosts). On each physical host, three volumes were created which were volume-mounted into the Minio containers. Inside the containers:

Minio itself was launched inside the container in the following way:

The command line of this process (PID 330) reveals more:

And, no surprise, here we can find the four IP addresses of the four Minio containers.

We launched some basic tests to make sure the setup would hold:

So far so good but one thing caught my eye: The minio server service, automatically built by deploying from the catalog, was set to "Scale" and not to "Global". The latter one, global, is usually my first choice to run services across hosts. And Minio, by definition, is such a service.

Another problem was also that on node #2 the doubled volumes are still on the system, using disk space:

At first we had some "hope" that the service would itself recover again, when each container was restarted - but the following error message shown in the Minio user interface was pretty much saying nay (Multiple disk failures, unable to write data.):

Luckily we were still in playground mode before some actual/important data was created and stored in the Minio object store. I decided to create static LXC containers for Minio and use the docker0 bridge in order to connect the (stateless) application Docker containers to Minio.
I was able to attach the LXC container "minio01" to the docker0 bridge and the container was able to communicate with the Docker containers on the same physical host. But, and this is the show stopper, it was not able to communicate with the Docker containers running on other hosts (but in the same Rancher environment). The reason for this is that Rancher uses some magic (technically speaking: An IPSEC tunnel between the Docker hosts) to "extend" the Docker-internal network (10.42.0.0/16) on to each Docker host. According to the Rancher documentation, it is possible to "join" this IPSEC tunneled network by manually running a Docker container with a specific label:

But of course this only applies to containers started and managed by Docker, not the Linux Containers LXC (System Containers as they're nowadays called).

The Docker containers, have one thing in common though: They use the Docker host as router/gateway. This means they are able to connect to the physical network using iptables NAT rules. So I created another virtual bridge called virbr0 alongside docker0, using the physical primary interface of the Docker host and used the host's IP address to now assign to the virbr0 interface.

The LXC container is now using this virtual bridge virbr0 as network link and the own host's ip address as gateway:

# Uncomment the following line to support nesting containers:
#lxc.include = /usr/share/lxc/config/nesting.conf
# (Be aware this has security implications)

Now the Docker containers and the LXC container have one thing in common: They use the same physical host as gateway. This means, they're using the same routing table and therefore are able to communicate with each other.

But how do I tell the Docker application containers where Minio is located now? In Rancher this is possible by using "External Service" in which you can set external IP addresses, outside of the Docker container range:

And this external service can now be used in the internal Rancher load balancer:

Although Minio isn't running inside the Docker environment managed by Rancher anymore, it still uses the same physical network connections (gateways) of the same hosts and therefore not losing any performance. On the other hand we feel much more comfortable and "safe" when the persistent data is running in a LXC container.