Monitoring Linux Containers (LXC, also known as System Containers to separate from the Docker world) is as important as you monitor your LXC host. But the usage view inside a container is sometimes "unreal".

Back in 2013, when I started the monitoring plugin check_lxc, the only way to really check the memory usage of a container was to check the current cgroup values of the container:

In the background of check_lxc.sh, the cgroup values of container1 are read. But why so complicated and not just run a classic check_mem.pl inside the container?

To answer that question, take a look at the following picture: 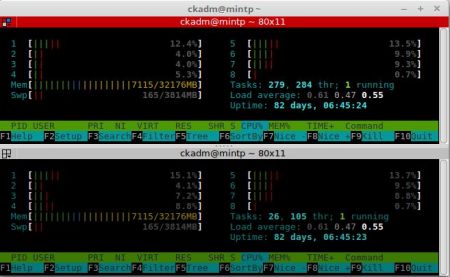 Focus on the memory usage; both the LXC host (top), running LXC 1.x, and the LXC container (bottom) show the exact same values.

Or to see it in text form:

The container only sees the same values as the host. But the container itself only uses 6187 MB according to cgroups, not 7135 MB.

That's why you should use check_lxc on the host to get a more accurate memory usage of the containers.

Now that I'm working on a new LXC environment on Debian Stretch, there's a newer LXC version (LXC 2.x). Something immediately caught my eye the first time I ran (h)top: 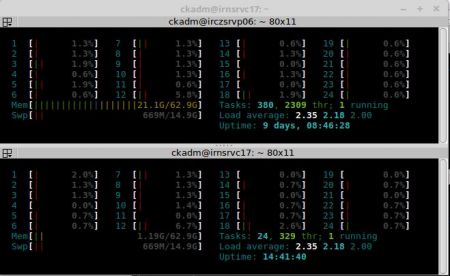 Focus again on the memory usage. This time the LXC host (top) and the LXC container (bottom) have different values. True, the (cpu) load and the swap usage is still the same on both host and container, but it's already something!

Doing the same check with free:

Note: These are different hosts and different containers than the values seen above from LXC 1.x.

Both host and container show the total capacity of memory and swap, but the used column clearly shows a difference.
But don't be fooled: The calculation on the available memory (last column) is kind of wrong in the container. That is because the container cannot know about the other containers running beside it and is therefore unaware of other memory consumers.

What about check_lxc in that case?

The big question now: Can check_mem.pl be used inside the container and give accurate alerts?

The answer is: No. Because the check_mem.pl plugin (as of today) makes a calculation based on the "free" output from above. And as long as these are kind of incorrect, the container's consumption of resources (disk, memory, cpu) should still be monitored on the host.

If you'd create a script/plugin which only checks the "used" value, you're probably good to go though.

But let's focus on the good news: When you're logged into the container and you run (h)top you now see the (more or less) correct memory consumption of the container. That's already a big improvement and really helpful.