How to use kubectl on a Rancher 2 managed Kubernetes cluster

Another big difference between Rancher 1.x to 2.x is (as of now, using Rancher 2.0.8) the fact that it is sometimes not enough to use the Rancher user interface or the API. To use the full capabilities of the Kubernetes cluster, sometimes it is required to directly talk with the underlying Kubernetes engine. This can be seen often when one researches in the Rancher forums.

The easiest way to start up the "kubectl" command, is to select a cluster in the user interface and then simply click on the button "Launch kubectl":

This opens up a shell window inside the browser. Kubectl is automatically started and connected with the selected cluster:

However the shell has some major limitations (e.g. copy/pasting). It's fine and very helpful (indeed) for quick checks and verifications but for deeper analysis it can be a pain. But there's also the possibility to use kubectl from your own machine and connect to the cluster, even when managed by Rancher. And this is what this article is about.

First you need to install kubectl on your machine. To do so follow the official documentation "Install and Set Up kubectl" which explains it straight forward. There are packages ready for almost every OS/distribution.

On my workstation I currently run Linux Mint 18.3, which runs Ubuntu 16.04 (Xenial) underneath:

To install kubectl on this Ubuntu 16.04 (Xenial) derivate, the following steps are sufficient:

The kubectl command can now be used:

So far so good, but how to connect to the cluster?

Remember the button "Launch kubectl" from above? There's a second button next to it: Kubeconfig File. Click on this button and you will see a config in yaml format appearing in the browser: 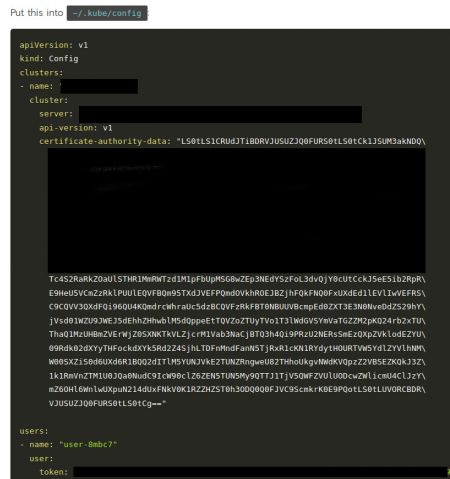 Copy the content starting with "apiVersion" until the end. Note that at the end of the config file the "contexts" are configured.

Edit: See edit note at the end of the article.
The advantage is clearly that you have one cluster to manage all the other clusters. But there's a downside: Kubernetes Federation is not yet considered mature. From the official documentation:

"Maturity: The federation project is relatively new and is not very mature. Not all resources are available and many are still alpha. Issue 88 enumerates known issues with the system that the team is busy solving."

The referenced issue 88 itself still has a lot of open tasks and problems.

Back to the topic: Copy the config content from the browser and save it into your user's kubectl config folder (which is located at $HOME/.kube or ~/.kube) as "config" file. You might need to create the folder first.

You can now launch kubectl commands:

ckadm@mintp ~ $ kubectl get all
Unable to connect to the server: x509: certificate signed by unknown authority

Oh! What's this? Actually this error shows up because the certificates, which are used to connect to the cluster created by Rancher, are self-signed. Ergo kubectl wants to play safe and doesn't let you connect. But there's a parameter to disable the certificate validation check:

Here we go, that's the same output as from the kubectl command launched in the browser shell.

From now on you're able to quickly connect to your Kubernetes cluster created/managed by Rancher and investigate and get more information, for example details about a pod:

Edit: A few hours after I already published this article, I stumbled across a post in the Rancher forums, which essentially asks for Kubernetes Federation in Rancher 2. It was denied with the same reason I wrote above: It is not mature enough. So this would mean Rancher 2.x does in fact NOT use Federation. Unfortunately it is not written in the documentation how exactly this "parent-child-clustering" is setup in the background.