This cross-node communication works (usually) very well and is (normally) hassle-free, as long as they run in the same LAN.

But my application is deployed across the world...

But what if application containers are physically separated into different locations and the hosts are not part of the same (Kubernetes) cluster?

There are a couple of possibilities to achieve this. But depending on how the application inside the container works, not all of them might lead to a solution. 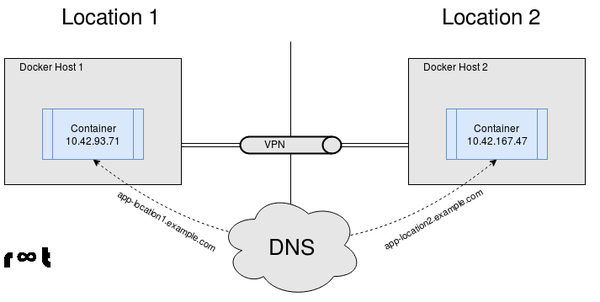 The problem in this potential solution? If you run this application in multiple containers on each location, you might end up with a lot of DNS entries and even more Ingress rules. And you might even lose deployment flexibility and salability, depending on your cluster configuration.

This would have been a solution if the application is only deployed once on each location. In our case, this would not work out.

Use a cross-cluster communication method

Rancher recently announced a new project called Submariner. The goal of this project is to enable communications between Kubernetes clusters. 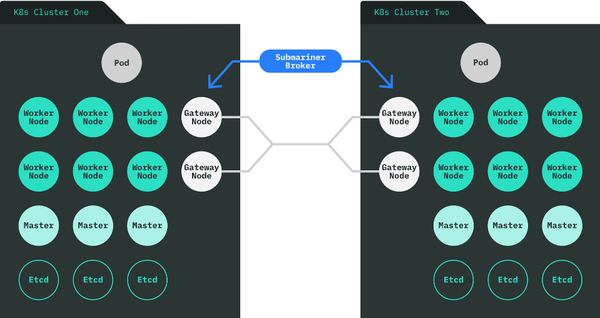 However Submariner is not yet considered production ready, so one should be cautious. That's also the reason why this potential solution was not chosen.

The architecture drawing shows a VPN tunnel between the two locations. This means that the Docker hosts on each location are able to communicate with each other, however the container's can't. Sure, the hosts of each location could all be part of the same cluster, but to avoid cluster issues with a flaky VPN connection, separate location-based clusters were built (and this proved to be a good choice!).

So what if the application wouldn't announce its own container IP address, but use the primary IP address of the Docker host instead? This, in combination with exposing the application port to the host (and not using HTTP Ingress), allows communication between the containers across locations through the VPN tunnel. Because the Docker host addresses are used, all traffic happens through the VPN tunnel and is on each host translated to forward the traffic to the corresponding container.

This scenario even works when the application is deployed several times on each location, as long as it is not deployed more than once on the same host.

But how can the container dynamically know the main IP address of its host? Especially if it is not known which interface is the primary one (there may be eth0, ens160, eno16777984, bond1, etc)?

One way we came up with is to use the hostname of the host. The primary IP address can be found in /etc/hosts:

Note: Of course this requires a correctly setup hostname and /etc/hosts!

Using this method, the hosts's primary IP address can be read and saved into an environment variable during start of a container:

Inside the container, the host's primary IP can be shown using the environment variable:

Of course the application port for cluster communication needs to be exposed, too.

The containers are started on both locations using an expose port 8888 on the host, resolving to port 80 inside the container.

curl and ping were installed in both containers to make a test connection across the locations:

The host IP address is verified:

Note: The end application with adjusted settings would now announce this IP address and the exposed listener port to the central storage.

Now the communication using the host IP's can be tested:

Checking nginx is running and listening:

And testing communication via the exposed port, through the VPN tunnel, using curl:

Using docker run the environment variables can set with dynamic values, for example from a command output (as shown before). Unfortunately this does not work when images are built using a Dockerfile. A workaround (for the workaround) needs to be found.

By default the Docker container runs in a "managed" network in a subnet used by all the containers. But there's also the possibility to use the host's network directly. In our infrastructure we use Rancher and the service settings allow to use the Host network: 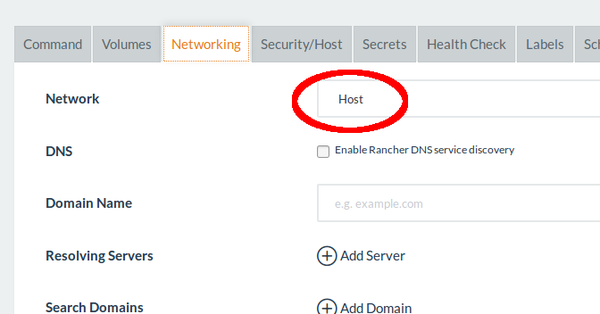 Inside the container this will now look like this:

So both IP address and hostname are taken from the host. This way this information can be used during the entrypoint script:

This variable $DOCKER_HOST_IP can then be used for further actions.

What did we learn?

Using the Docker host's primary IP address and expose ports can serve as a workaround to enable a cross-cluster-communication between containers. In this example a VPN tunnel was used, but this could also be replaced by a public IP (and/or DNAT) to the Docker host. However the most important point is the application itself: Although the application was built cluster-aware, it did not count the possibility to run a cluster across multiple networks, at least not inside an application container.

Either the application needs to allow such scenarios or on system side a workaround needs to be implemented. We chose the latter, ergo this article ;-).

If the whole Docker/Kubernetes infrastructure is too much hassle and you simply want to enjoy an available Kubernetes cluster to deploy your applications, check out the Private Kubernetes Cloud Infrastructure at Infiniroot!