The VTech Kidizoom Touch 5.0 is a nice first camera for the (small) kids. It features a 5 MP front camera (hence the 5.0) and a selfie-camera with 2 MP. The camera comes either in blue or pink. Besides the "classical" camera function, the device also has some image editing tools and games on it, making it a multimedia device rather than a simple camera. 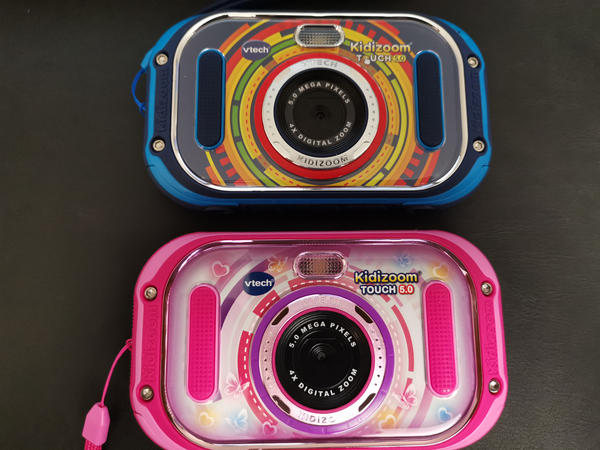 The screen is a 640x480 pixel touch screen (hence the "Touch" in the product name). By adding a microSD card, the internal storage (which is too small in my opinion) can be extended. I did this with a 16GB microSDHC card. The internal memory is shown as "VT System" when connected to a computer, the micro SD card is shown with the name of the SD card (in my case simply "16 GB Volume".

There is no network connection possible but data can be transferred using a micro USB cable, or by taking out the micro SD card.

What about music and movies?

Creating photos and even videos is fun for the kids. But I wanted to see, if they could also use the camera as a multimedia playback device, too. I haven't decided yet if I am going to actually allow that but I wanted to calm my technical curiosity and figure out what is needed so the device would correctly play multimedia files.

When the device is connected to your computer a folder called "MUSIC" can be found in the base directory. Simply placing an mp3 file into it does the trick. The audio file can then be played on the Kidizoom Touch in the "MP3 Player" application. That was easy.

Video clips - watch out for the correct codec!

Videos transferred from the computer to the device can be placed into the "DOWNLOAD/VIDEO" folder. However if you simply place a video file into it without re-encoding it, you will most likely get an error "File error." on the device: 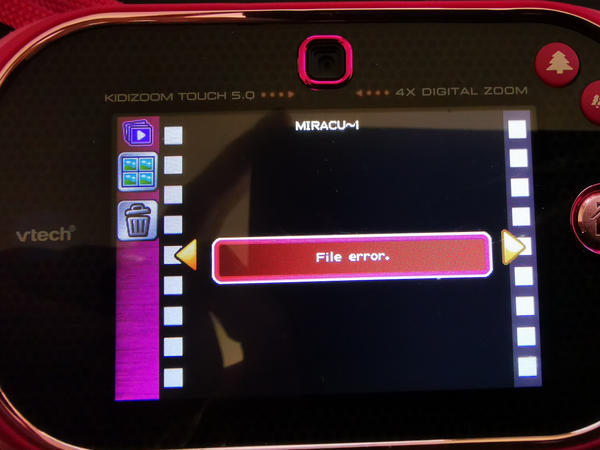 As I was unable to find information about the used codec anywhere, I decided the quickly film a video sequence with the camera and then check out the codec information with mediainfo.

mediainfo nicely shows the relevant information: As codec the MJPG video codec was used, video size is set to 640x480 pixel (the size of the display actually).

Re-encode a video with ffmpeg

With the relevant video/codec information from above, any video file can now be re-encoded to match the requirements of the Kidizoom Touch 5.0. I first tried it with Handbrake, however with Handbrake I was unable to select the MJP(E)G codec. My second (but correct) choice was ffmpeg.

The original video file has a 16:9 aspect rate with a dimension of 1280x720 pixel. Using ffmpeg I created three output video files.

The first output file would have a fixed width of 640px and a height of 360px (trying to respect the original 16:9 ratio):

The second file would use the full display and setting a ratio of 4:3:

And finally the last file would use the full width and a dynamic height (respecting the original 16:9 ratio):

Once the encoding was completed, the files were transferred to the Kidizoom.

Time to see if I got this right. Once the device was powered on, the video files were shown in the "Playback" application: 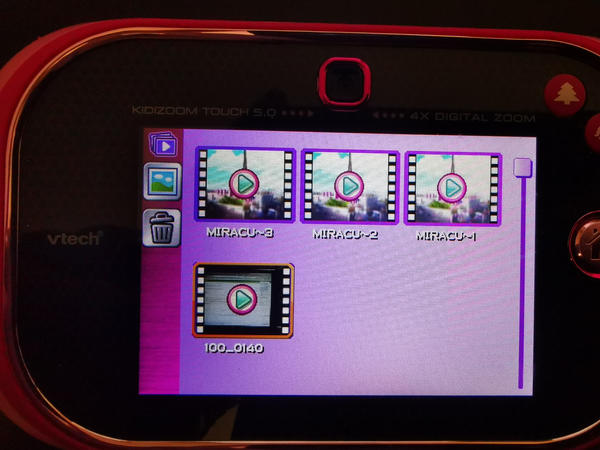 All of these files could be played (thanks to the correct video codec). I tried to find out some heavy optical difference between the different dimensions of the video files but it seems that the device itself in general simply uses the full display and re-scales the video if needed. So simply using a 640x480 dimension would have been enough.

Hi, worked so far for me. The problem is that FPS can be higher than 15fps (tested 24&30) but the audio will come unsync. minor detail but yeah you have to think of that.

Still this device astounds me how good its software works on the device. seen worse in 50k eletric cars :D

It works fine. Thank you.