Published on May 5th 2020 - Listed in Docker Kubernetes Containers Security

Running (Docker / Kubernetes) containers means an image was downloaded (pulled) and started (run) on a host. The image usually resides on centralized and publicly available repositories - called registries in the container world. The best known such registry is surely DockerHub, which is maintained by Docker Inc. There are some other known registries such as Quay.io, maintained by Red Hat.

But besides these public registries, it is also possible to build a private registry. This may cause additional efforts for the setup, resources and maintenance, but using a private registry is one way to harden the whole container infrastructure and avoid installing potentially vulnerable and dangerous container images.

Harbor is such a private registry. It's an open sourced project lead by VMware and is, as of this writing, a CNCF project in incubating status. But Harbor is not just a private registry where one can push and pull images from - it also allows to "plug" vulnerability scanners into the registry. Imagine an anti-virus-scanner on your workstation which runs scans through your files and directories in your file system. More or less the same happens with the pluggable scanners inside Harbor: The images are scanned for known vulnerabilities. Harbor features one embedded scanner already, called clair. When Harbor is installed with the relevant parameter (./install.sh --with-clair), clair will be running alongside Harbor.

Inside the registry, multiple repositories can be created. Each repository with its own RBAC system, allowing to control who or what is allowed to push or pull images. In the following screenshot, a repository called "test" was created. 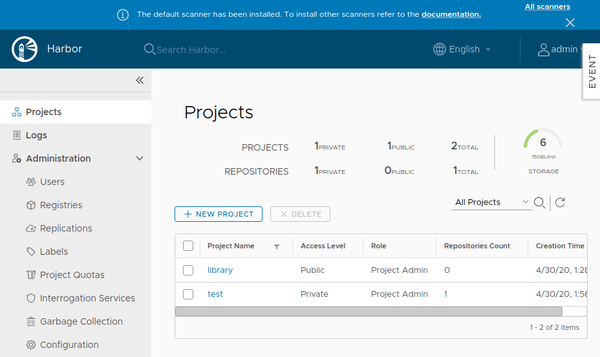 The basic idea is to either build your own image or re-use an existing image, tag it, then push it into such a repository. An easy example is to use the publicly available "nginx" container image from DockerHub.

First the image is pulled:

The now locally available nginx:latest image can be tagged:

Once tagged, the local image can now be pushed into the remote registry:

So far so good, but if you want to harden your container infrastructure, a docker push should not just work out of the box without authentication.

When a repository is configured as "private", only authorized users are allowed to push into this repository. Which means: The docker client needs to be authenticated first.

When Harbor is run behind a reverse proxy, there can be all kinds of weird issues. The "unknown blob" error is one of these.

Unfortunately the Harbor setup documentation is not (yet) set to a certain level to support multiple ways of how to run Harbor and (as of this writing) expects Harbor to receive direct http/https communication. But by going through a couple of issues (Docker issue 970 and Harbor issue 3114 are worth to be looked at), it all is related to a reverse proxy setup and ssl/tls offloading.

If a reverse proxy is run before Harbor and communicates with Harbor using plain http, inside Harbor there's a problem with handling the correct http scheme.

The tricky part is to find out what exactly is causing the communication problem. As it turns out, the Harbor-run Nginx container is itself is a Reverse Proxy in front of the core and the portal containers (depending on the requested path) and tries to overwrite the http protocol scheme with the http header X-Forwarded-Proto.

To circumvent this, the Nginx config of this Harbor Nginx container must be slightly adapted. This can be done in the unpacked Harbor directory, in which ./install.sh was launched. The Nginx configuration can be found in common/config/nginx/nginx.conf and even contains the relevant information what to do:

# When setting up Harbor behind other proxy, such as an Nginx instance, remove the below line if the proxy already has similar settings.
proxy_set_header X-Forwarded-Proto $scheme;

The setting of the X-Forwarded-Proto header must be prevented - so these lines must be commented-out:

# When setting up Harbor behind other proxy, such as an Nginx instance, remove the below line if the proxy already has similar settings.
#proxy_set_header X-Forwarded-Proto $scheme;

There are a couple of occurrences of these lines. All of these entries must be disabled. Hint: Simply search for "behind other proxy" and the relevant lines are quickly found and disabled.

Now is also a good moment to add an additional parameter to harbor.yml. Just after the http port definition, add "relativeurls: true":

Once the Nginx config and harbor.yml were adjusted, all Harbor containers need to be restarted. This can be done using the docker-compose command inside the unpacked harbor directory:

The docker-compose command takes care of starting the necessary containers with the relevant configurations.

The Nginx config on the TLS-offloading front reverse proxy is pretty straightforward:

Note: You might want to make sure, proxy_buffering is set to off in proxy.conf.

Time to find out whether or not these adjustments helped to overcome the unknown blob error on docker push:

Finally, the container image was successfully pushed! In Harbor's UI this can be verified by checking the repository "test": 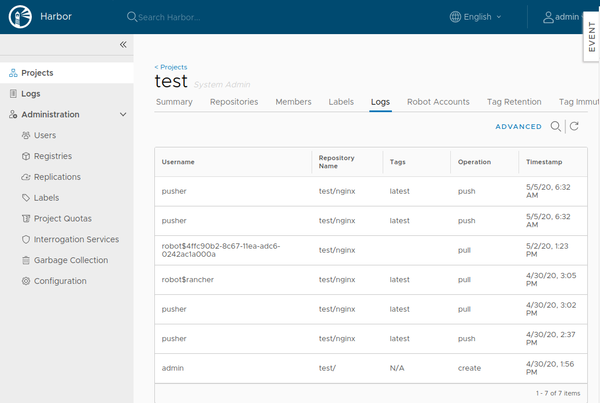 Setting up a private registry for container images isn't as hard as one believes. There are a few gotchas, mainly due to lack of proper documentation (to handle different use cases) but with enough research and willingness for try'n'err, Harbor turns out to be a great helper on hardening a container infrastructure!

If you want to know more about container infrastructures such as Kubernetes based Rancher 2 and Harbor setups on premise, contact us at Infiniroot.