Digital TV recording (even scheduled) made easy with Libreelec, Kodi and Tvheadend

Those who are of age 30 and older probably still remember the days when a movie or a series would be on the TV and you wanted to record it. Back in the days we probably all used the same method: A VHS recorder.

In the present, the VHS days are long gone. When VHS was replaced by DVD, then HD-DVD and Blu-ray (the latter eventually won the title industry standard after a long battle) and finally streaming, the "easy recording" days were gone, too. I know there are or were DVD recorders available but I have never met a single person who ever used one of these.

At the same time, Internet connection speeds increased so streaming and downloads would be possible. This also gave rise to so-called digital TV recording sites, such as OnlineTVRecorder (which I personally used for a couple of years).

But is TV recording so much more complicated now than in the VHS days? Let's put this to the test!

When I moved to another canton (state) in Switzerland a couple of years ago, the local provider would send the television signal via DVB-C. But my (meanwhile old) TV only had a DVB-S antenna built-in. This had worked fine for the old location where the provider there used to send the signal via DVB-S. But in the new location, the TV would not pick up any signals due to an incompatibility between DVB-S and DVB-C - or better said: The TV's antenna only picked up DVB-S.

I didn't want to buy a new TV just because the antenna wouldn't pick up the signal so I decided to give it a shot with Openelec and Kodi. At first I wanted to build my own system using a Raspberry Pi and a TV mutex/antenna but by chance (ad on the OpenELEC website) I came across the Wetek brand and bought the Wetek Openelec box (aka Wetek Play 1), which already had a DVB tuner (antenna) included. 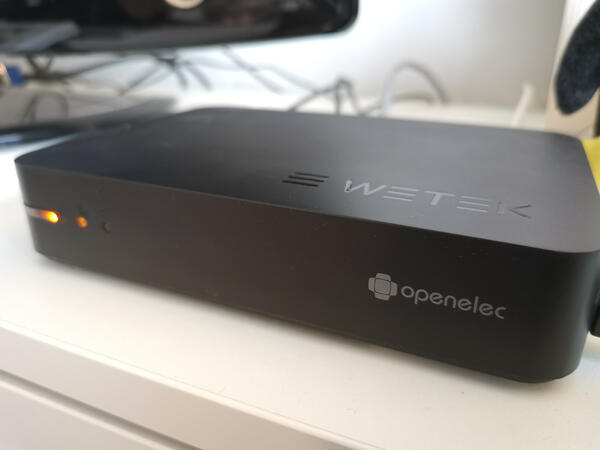 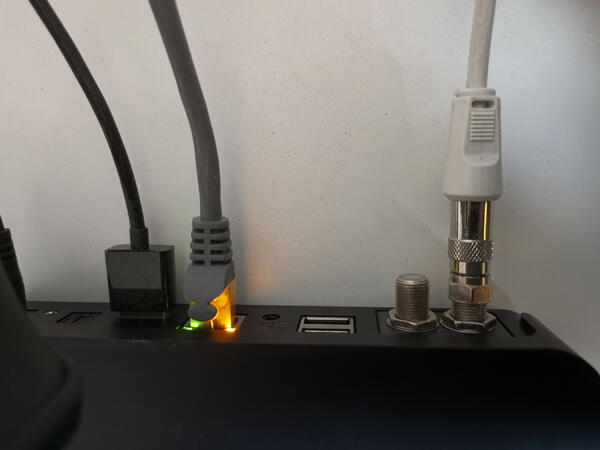 Note: As of this writing in August 2020, Wetek does not seem to produce any multimedia boxes anymore. This is a real bummer, because the devices were pretty cool, looked nice, were resiliant and the Wetek support (forums) was very helpful all the time.

To use the TV tuner (antenna) inside Kodi, two add-ons need to be installed:

Both programs are part of the OpenELEC and the LibreELEC addons and can be installed directly from within Kodi.

As you can tell from the device name (Wetek Openelec Box / Play 1), I've had this multimedia streaming box for a couple of years already. The old LG TV got meanwhile replaced by a much larger Samsung TV (with a DVB-C tuner). The old TV and the old Openelec box moved to my office. I wasn't in need of the Openelec box to watch TV anymore.

But very recently my wife asked me if I could record an episode of a TV series she'd miss on a certain evening and I remembered the Openelec box in the office with Tvheadend. It's geek time!

Meanwhile running LibreELEC on the box, I first had to make sure Tvheadend was running correctly. I checked and the current installed version is the latest Tvheadend Server 4.2 (version 8.2.113) and Tvheadend HTSP Client 3.4.27.1. 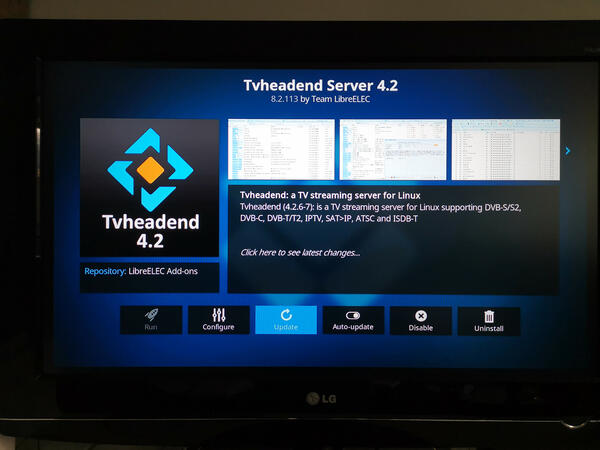 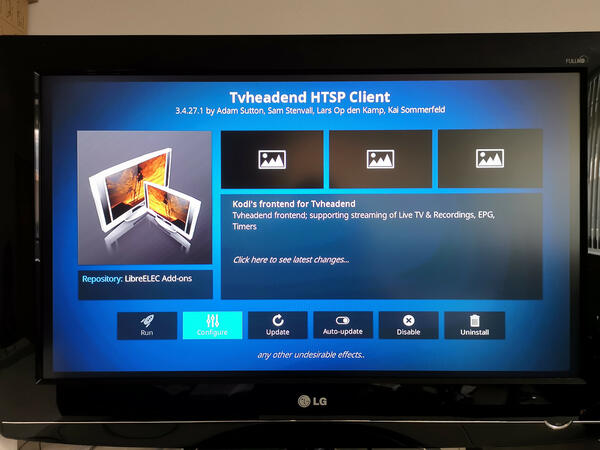 Something important here can be found in the settings of the HTSP Client. Open Configure inside the Tvheadend HTSP Client and you should see this: 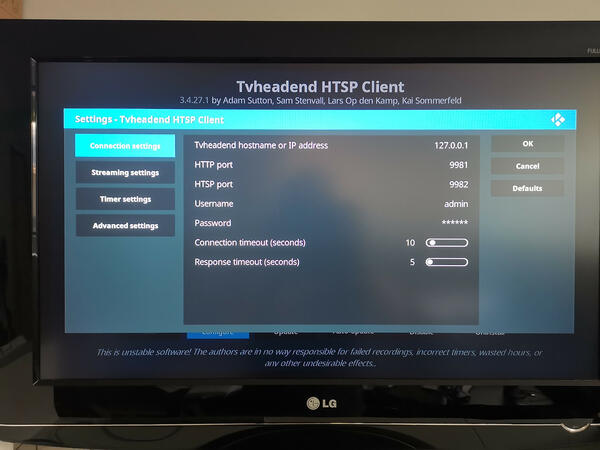 Here the HTTP port is set to 9981. This information (and the username/password credentials if defined) we need for the next step.

Using a browser, the Tvheadend HTSP Client can be accessed using the IP address of the Kodi box and port 9981. The browser will ask for (basic auth) credentials if these were set in the addon configuration. Once logged in, a user interface should appear, showing the current tab Electronic Program Guide (EPG): 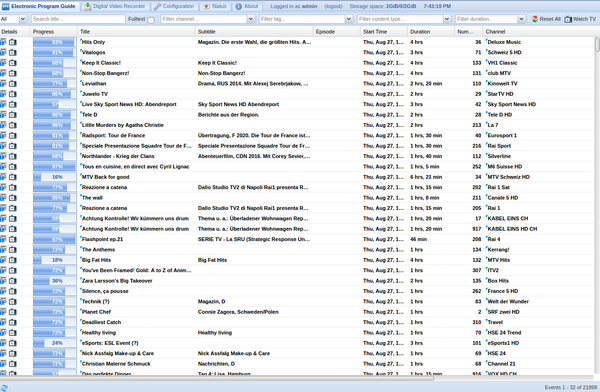 Clicking on the Configuration tab and then Recording, allows to configure settings for the Digital Video Recorder (DVR). A default profile should already exist. Important here is to look at the path, where Tvheadend should store the recordings (Recording system path). By default this is set to /storage/recordings but depending on your setup, this path may only have a very limited space.

I simply adjusted the recording path in the settings: 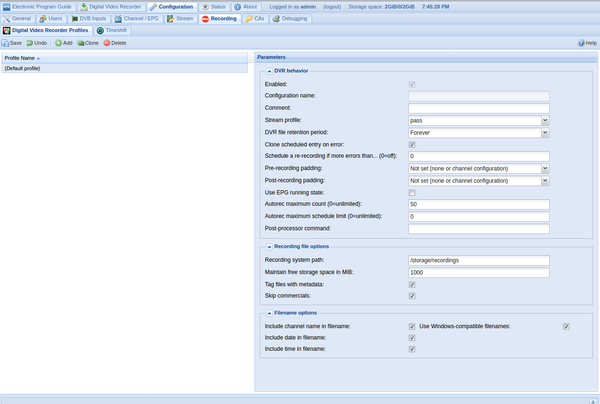 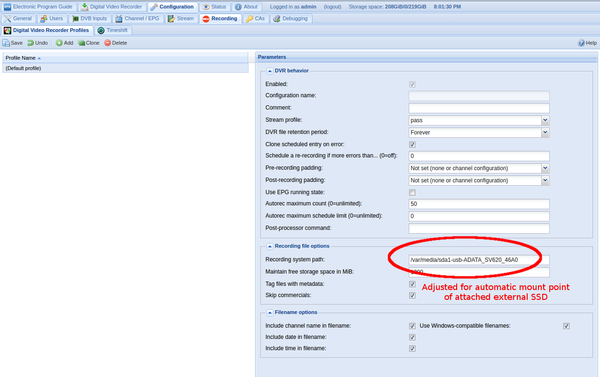 Once the settings were saved to the default profile, go back to the Electronic Program Guide (EPG).

By clicking the information icon in the details column in the EPG, a broadcast details window pops up. At the bottom of this window you will find recording options. This also allows to select a DVR profile, in case you have configured multiple profiles. Otherwise just the default profile will be able for selection:

By clicking on Record program, the selected program will start recording immediately. A round record button should now appear in the EPG.

You can also double-check this when changing into the tab Digital Video Recorder -> Upcoming / Current Recordings.

More interestingly however is the scheduled recording. The EPG also allows to search for programs in the future (as long as the EPG contains this data). In this case I searched for the term "married" and a couple of upcoming episodes of "Married at First Sight Australia" showed up in the EPG.

The same steps happen here again: Click on the information button on the left side and then click on Record program. Back in the search, a "scheduled recording" icon should appear in the EPG:

This can also be verified by changing into the Digital Video Recorder tab in the Upcoming / Current Recordings:

Once a recording was completed, you should be able to find them again under the Digital Video Recorder tab -> Finished Recordings. The Tvheadend user interface allows to directly download the recorded video in the browser. Simply select the finished recording, then click on Download:

Another alternative (for the Linux people like me) is to download the recording using scp (via SSH):

Note: When enabled SSH on LibreELEC, the default SSH access credentials are: root:libreelec

What about the video codecs?

In the default DVR profile, the stream profile is set to "pass". This creates a video file with a ".ts" suffix and the following media information:

In the settings there are other stream profiles available. A very widely used one is matroska, the codec used behind videos with the ".mkv" suffix: 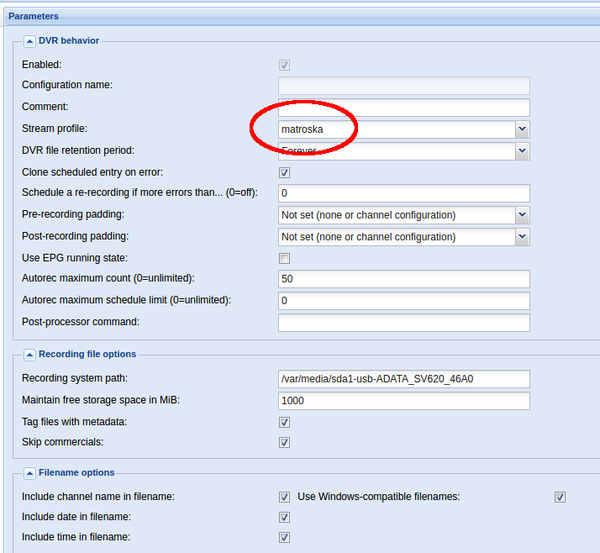 I finally ended up using matroska as stream profile for all the recordings - mainly for compatibility but also for quality reasons. This gives the following media information on video recordings:

To be honest: I expected digital video recording as something much more complicated. However it turned out pretty easy and straightforward!

All you need is: 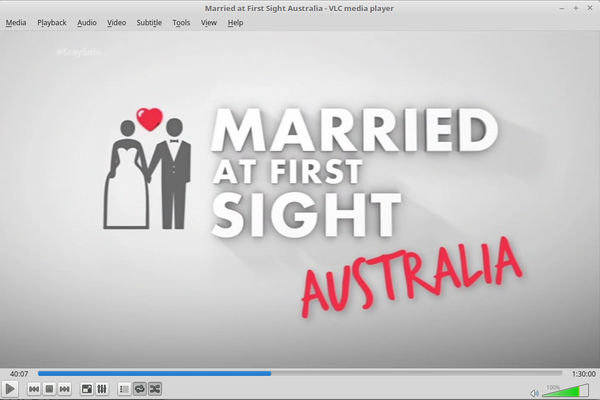