When I went through my family pictures from our last vacation (before COVID-19 happened), I was getting frustrated because most of the pictures could not be opened with the default image viewing program (xviewer) on Linux Mint 18.3.

xviewer is by default the preferred application for photos

It is also by default configured as preferred application for opening photos: 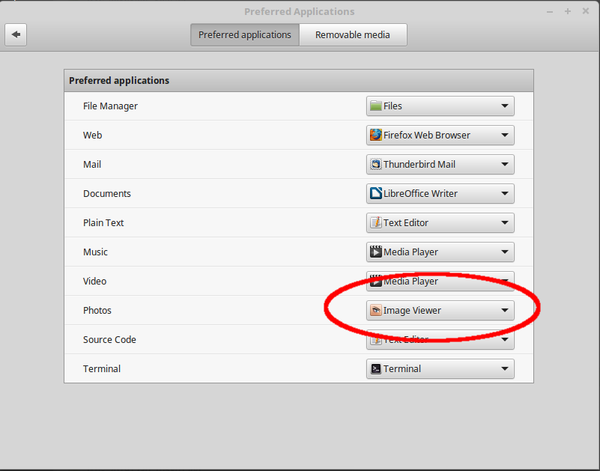 Opening a small sized picture (talking about file size), the picture would be shown without a problem. Even a photo with a couple of megabytes (3-4) would open. However whenever a large photo (above 10MB) was opened, Image Viewer (xviewer) would open with a black background and immediately disappear again (all within less than a second). I used peek to record this phenomenon as a gif:

First a smaller sized photo (3.8MB) was opened without a problem. But then the next photo (16.7MB) didn't show up. When watching closely, one can see Image Viewer opening up with a black background and then disappear again.

At the same time of the disappearance of Image Viewer, one particular log file changed:

This confirms: xviewer has crashed.

Note: When no crash report exists, the last log line would be: wrote report /var/crash/_usr_bin_xviewer.1000.crash

By looking at the crash report, I couldn't figure out why the crash happened. But due to the fact that smaller images worked fine and only large images were affected by the crash, my suspicion goes to a problem in memory allocation.

Luckily there are a lot of alternative image viewers / graphic programs available. Nomacs was the first program listed in It's FOSS Top 11 Image Viewers for Ubuntu and other Linux, so I gave it a shot.

Now with Nomacs installed, I opened the large photos with Nomacs, using "Open With" in Nemo (default File Explorer in Linux Mint) and finally the photo opened: