The following recording shows the behavior.

In the previous Linux Mint versions (17.3 and 18.3) this did not happen? What has changed since? The Terminator version, of course.

On Linux Mint 19.3 (broadcasting to all windows):

Frankly this bug has been reason number one for me to remain on the meanwhile outdated Linux Mint 18.3 on my desktop. Of course there is a workaround. Instead of selecting "Broadcast all", create groups and then select "Broadcast groups". But it is just annoying and over long time just very time intensive to first create groups instead of having separate windows for different tasks or server groups.

But is it actually a bug causing this?

After some research, the following bug report was (finally) found which explains the same situation: Ubuntu bug #1751270 Terminator broadcasts to other terminator processes. And there, user hijglander caught one important fact:

the solution is to disable the "DBUS server" in Preferences.

Terminator is known to have broadcasting issues with xBUS servers, see article Terminator terminal suddenly inserting each character twice when broadcasting to multiple windows. This would actually be a good explanation.

Once in Preferences (right click on a Terminator window, select Preferences) the "DBus server" option is by default enabled: 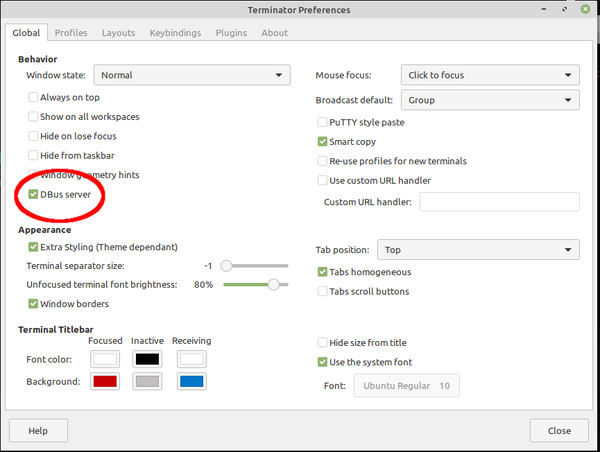 After DBus server was unselected and the Preferences window closed, all Terminator windows must be closed.

Broadcast all without DBus server

Once new Terminator windows were launched (same constellation as the above recording), the "broadcast all" setting returned back to the expected behavior; the input is now only broadcast within its own Terminator window!