Today I was stumbling across a very interesting problem: CentOS 7 machines would not show any disk usage graphs in our Grafana dashboard (which uses InfluxDB as data source and Icinga 2 as monitoring system). 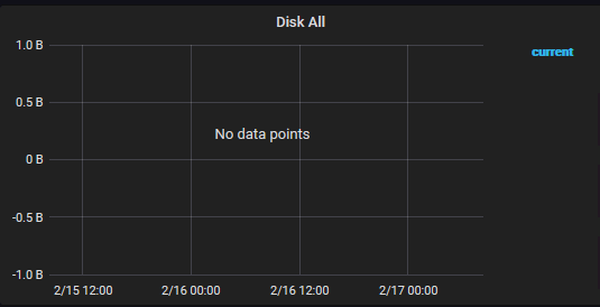 Looking closer in Icingaweb, the value of the disk usage seems to be 0. On every partition. On every CentOS 7 server.

When looking at an Ubuntu Linux server, the values clearly show up:

Where does this 0.00 value on the CentOS machines come from? Is it the plugin check_disk itself? Or is NRPE the reason the data is not correctly landing in Icinga?

By executing the nagios-plugin check_disk on the server, did not seem to trigger any errors. Certainly no 0.00 values, neither in the output nor in the performance data:

Even by executing this exact check command through NRPE seemed to work:

So both ways to execute the plugin (locally and via NRPE) seem to work. Maybe Icinga has a problem parsing the performance data?

A look into the Icinga logs quickly turned up a WARNING entry:

So obviously Icinga somehow thinks that the received performance data is invalid and refuses to write the values into InfluxDB. But why?

Note: At this point I still didn't see the issue. Even for my trained monitoring eye using 15+ years of nagios/monitoring-plugins. ;-)

A research on the Internet led to a discussion in the Icinga forums and from there to the actual source of the problem: A bug in nagios-plugins!

Issue #518 in the nagios-plugins repositories describes a regression bug introduced by nagios-plugins 2.3.0. In the release notes of 2.3.0 the following change was applied to check_disk:

This change caused the performance output units to show MiB instead of MB. However "MiB" is not a valid UOM (Unit of measurement), even described in the Nagios plugin developer guidelines:

UOM (unit of measurement) is a string of zero or more characters, NOT including numbers, semicolons, or quotes. Some examples:
no unit specified - assume a number (int or float) of things (eg, users, processes, load averages)
s - seconds (also us, ms)
% - percentage
B - bytes (also KB, MB, TB)
c - a continous counter (such as bytes transmitted on an interface)

The regression was fixed 3 months later in nagios-plugins 2.3.2:

It's fixed, all good, right?

Even though the bug was fixed in the upstream project "nagios-plugins" in 2.3.2, the bug is still around in the current nagios-plugins-disk package, installed from the EPEL 7 repositories. Interesting however is the fact that the package version is showing up as 2.3.3:

A bug report was opened in the Fedora EPEL project: Bugzilla 1929568 mentions these findings documented here in this article. Hopefully this bug will shortly be addressed and a new package in the EPEL repositories released.

However further analysis with the latest available upstream release nagios-plugins-2.3.3 reveals that this regression is still happening, although marked as fixed in the changelog:

Therefore it's actually still an upstream bug and issue #518 should be re-opened again.

Fortunately an immediate workaround is available: By using the -m parameter, the values will be shown in MegaBytes:

This corrects the UOM in the performance data and data can be parsed and written into InfluxDB again.

For NRPE setups, the check command needs to be adjusted accordingly: