A couple of years ago I bought a multimedia/media center box: A Wetek Openelec box. This is basically the same device as the Wetek Play (1), just with a different branding on the box. 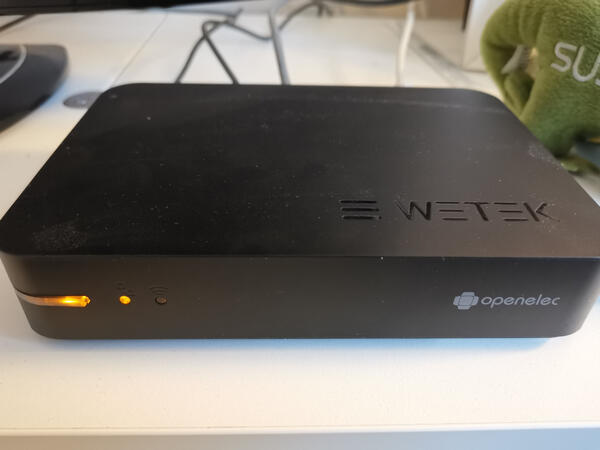 Although I replaced that box with the successor model (Wetek Play 2), I kept the older Play 1 in my office. I mainly used this box on very rare occasions or to check the door using the Surveillance Cam add-on for Kodi. 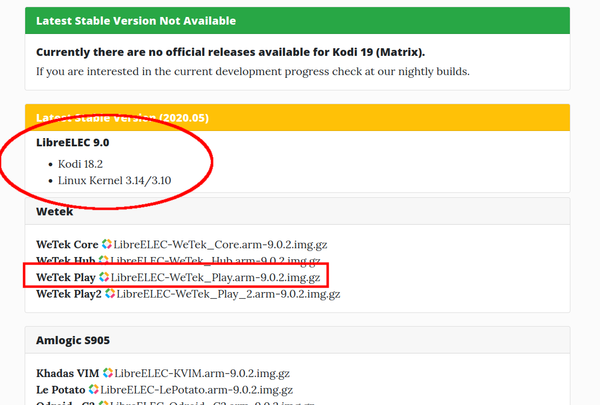 But wait, there's a fork!

During my Christmas holidays, I did some research and stumbled upon a discussion in the LibreElec forums, which seems to be an unofficial update of LibreElec for the Wetek Play 1 device. After reading (almost the whole) thread, the feedback sounded pretty good so I decided to give it a shot.

The LibreElec fork itself is based on the last official release, 9.0.2, and is intended for older media boxes with AMLogic processors. The Wetek Play 1 uses the AML8726-MX processor, also known as Amlogic Meson 6. Although hardware support (in the Linux Kernel) for Meson 6 is not great, the developer (@dtech) still managed to get a working LibreElec update released. 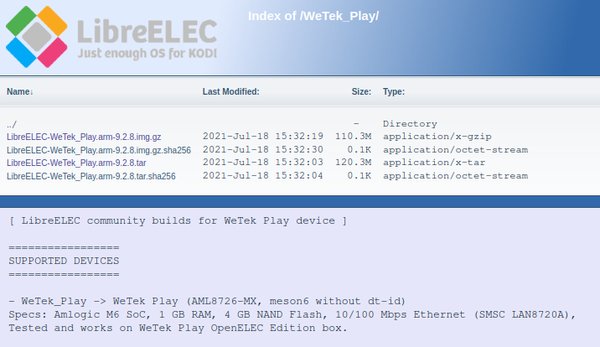 The fork's release is currently LibreElec 9.2.8, which includes Kodi 18.9 (the last Kodi Leia release) and can be downloaded as SD card image (img.gz file) or as update package (tar file). The dedicated download page also shows additional information about the release.

I decided to make a clean sweep and use a new microSD card for the installation. After I downloaded the LibreELEC-WeTek_Play.arm-9.2.8.img.gz file, I also downloaded the official LibreElec SD Card writer tool (LibreELEC USB-SD Creator) and launched it (requires sudo to write to the SD card). However instead of choosing a version, the [Select file] button should be used to select the previously downloaded img.gz file: 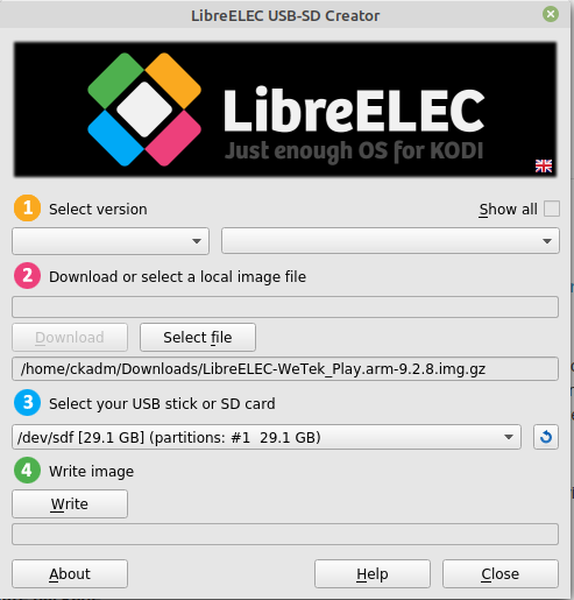 After the data was written on the microSD card, the card was inserted into the Wetek device (on the right side there's a microSD slot) and the device booted from the SD card.

Note: The instructions from dtech mention the "toothpick" method in order to boot from the SD card, but that was not necessary in my case.

Testing LibreElec 9.2.8 on the Wetek Play

As I decided to go with a "clean" and new OpenElec, obviously previous configurations, playlists, add-ons, etc. are gone (not really gone, as they are still on the internal NAND memory, just not on the SD card). But this also allows to do a thorough test of the LibreElec fork. The following was successfully tested:

Some additional notes on the tests:

*2: Some TV channels appeared to have lagging issues after a few seconds. Not sure if this is related to the updated LE version or a problem in the tuner settings.

*3: Some remote control buttons needed to be (re-)configured. First the "Joystick support" was disabled (Add-ons -> Add-on browser -> My Add-ons -> Peripheral libraries -> Joystick support), as it could interfere with remote controls. Then the Keymap add-on was installed, to change button mappings (specifically for the Context Menu, Go to Favorites and the Mute button).

*4: The video player in the newer Kodi release seems to be missing the control buttons (stop, play, rewind, forward, etc) when a video is paused. I was unable to find the reason (or the related settings) yet.

Even though LibreElec 9.2.8 (with Kodi 18.9) is not the newest available version, it is still great to have this unofficial update available. There are clearly some improvements and fixes in the background. And the best thing: Everything works. However the Wetek Openelec / Play 1 box can sometimes be laggy and slow. But this is not due to the update but, as mentioned before, due to lack of hardware support of the Amlogic Meson 6 SOC (and the slow 32-bit dual-core processor, compared to today's processors).

A few screenshots from the updated box (with the Amber skin): 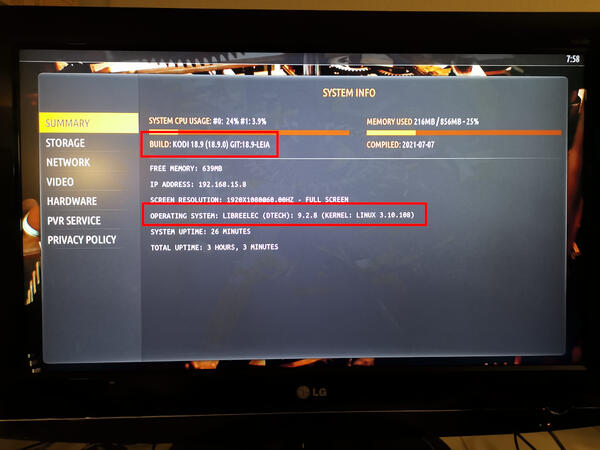 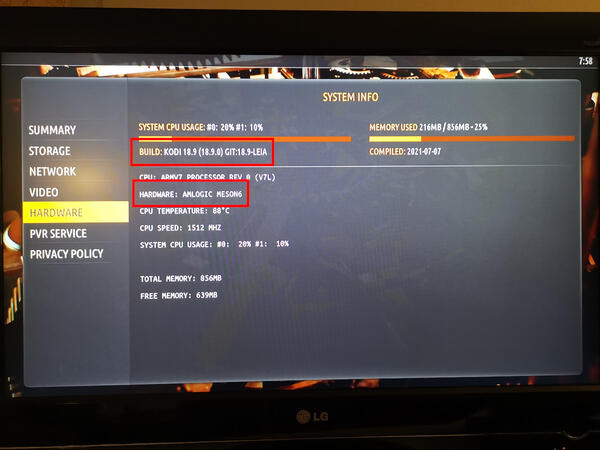 It is meanwhile September 2022 and several months have passed since the original blog post. The Wetek Play 1 is still getting love and updates from the developer dtech. The latest release is LibreElec 9.2.8.6. I've just successfully updated the Play 1 (using the tar file, uploaded into the "Update" folder in the Samba share). 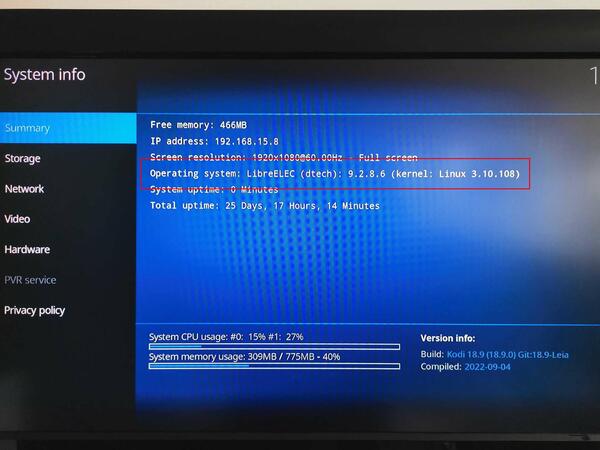 Hi Graham. I actually have the same problem with the star/favourite key.

Great article, Claudio. I've installed onto the NAND and all is good except I had no luck remapping the remote's star key to open favourites and the power button doesn't start or shutdown. Please email me your gen.xml file (or post it here)

If you have already LibreELEC installed, you can update your device (no need to flash again the SDCard).

If you have SSH access to the device is as easy as going to the /storage/.update folder, download or copy there the latest release from the fork and reboot the device. Once restarted it will install the new update and since its just a fork it will work out of the box.

agarciaexposito from Install image from SD Card to internal memory (eMMC or onboard NAND Flash): wrote on Jan 27th, 2022:

Thanks! Stumbled upon your post as I was wondering what to do with my old Wetek Play 1.
Cue several hours down a rabbit hole later! LibreELEC 9.2.8 can be installed on the NAND too by using the .tar and updating, but only works by following method here:
https://forum.libreelec.tv/thread/17626-wetek-play-1-cant-update-to-9-0-2/?postID=135503#post135503

Also tried recent(ish - 2017) Enigma2 image, OpenATV, which seems to work well. Find it very easy to navigate using the remote, with some remapping, and the BlueHD skin. I use an Enigma2 box for normal TV viewing, so am reasonably familiar with it. SD card image for the Wetek can be downloaded from here:
http://images.mynonpublic.com/openatv/6.0/index.php?open=wetekplay

Hope your post and the above help keep a few out of landfill!