Just recently I wrote about how to mount a hard disk which is a member of an Intel Raid Array to back up data. And now, a few days later, I must report a degraded RAID-1.

Even the BIOS doesn't see the disk anymore, the Raid Controller sees something but completely messes up the disk information; take a look at the disk model (the disks are identical). 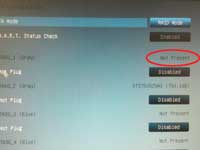 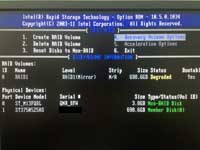 This is a completely new computer, taken in production only in June. One of the two hard disks, a Seagate Barracuda SATA III 750GB (ST3750525AS, 7200.12) already failed. A big disappointment to me, who has been using the previous computer with a single hard disk for 7 years. Is this bad luck or are the hard disks just worse now than some years ago?

Update 7pm: I recorded the sounds the defect hard disk made. If anyone's interested, you can listen to it here.

You\'re right. I was a big fan of Maxtor and was disappointed that there were bought by Seagate. But it seems to be a general problem as well, the disks from all vendors seem to have more problems than some years ago.

As you may have already researched...

Seagate took possession of Maxtor a couple of years ago. Since then I personally have seen a huge decline in the stability of their drives. I worked computer retail when IDE gave way to SATA. I can say that I changed from Seagate to Western Digital when this happened due to a huge influx of failures on Seagate drives.

Western Digital has treated me great since the change to SATA. Something worth noting is that Seagates high end line is SAS, where Western Digitals high end drives are still SATA.