Back in June 2011 I wrote about new "intelligent" blog spamming where bots left comments on blogs.
Since then, blog-spamming sharply increased. As the webmaster of a blog usually gets a notification-mail that a comment was written on the blog (often with the content of the comment), this is equal to a spam. It's in fact even easier for a spammer because he doesn't even have to know the recipients e-mail address.

In the past months I've gotten so many comment-spams per day, I got tired of "cleaning" them out. Also it increased the risk of not seeing a "real" comment. Nothing is worse than deleting a ham, may this be a ham-mail or a ham-comment!
From the beginning I've always been using so-called captchas, images which show letters or other characters, mixed with background noise to make it difficult for bots to read it. That worked fine for many years but the intelligence of such spam-bots seem to have increased a lot. Even after changing the font of the captcha to something almost unreadable, the bots were still able to comment-spam me while humans had difficulties to read the characters. Time for something new!

On other blogs I've already seen other possibilities and I decided to use questions instead of captchas:

To compare the difference between comment-spams with captchas and questions, I counted the number of spams per day since March 1st until March 31st. The date of the switch (from captcha to question) was on March 18th. The following graphic shows the effect: 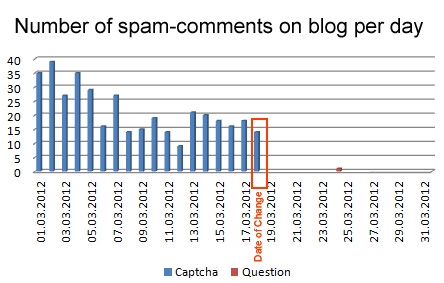 Yes... You see correctly. Since I changed the way of "human-proof", the comment-spams got down to nearly zero! Only one spam went through on March 24th.
It's of course important that not only one question exists, there should be several questions randomly shown. But careful - the questions shouldn't be too difficult, they should be questions about general knowledge.

very true, captcha are a pain for human..
more they are becoming an anti-human only-robot filter .....

see ya for a beer man!