Published on May 2nd 2012 - Listed in VMware Virtualization

As I already wrote in an article (Slow hardware discovery/check with ESXi 5.0 U1) in March, there is a bug in the current ESXi version (5.0 U1) which slows down the query of the CIM entries. VMware acknowledged the bug and announced a bugfix for Q3.

Now I just saw that VMware has created a new Knowledge Base entry on April 17th for this particular bug:
http://kb.vmware.com/kb/2016538

This is not only great for ESXi admins to track this bug and find updated information but it is also great for the Nagios plugin check_esxi_hardware.py as it is mentioned directly in the KB article!
Take a look at the screenshot (or visit the KB link above): 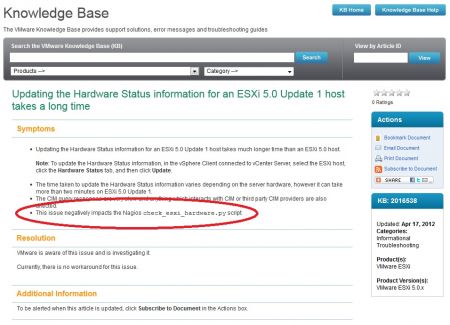