Whenever such annoyances bugged me, I ditched the stock ROM and replaced it by CyanogenMod (successfully installed

But that's easier said than done.

Spoiler: The reason for all this is because the Samsung Galaxy S5 Plus G901F is not a klte device, but rather a kccat6 device.

This software is provided free of charge. Copying and redistribution is
encouraged.

If you appreciate this software and you would like to support future
development please consider donating:
http://www.glassechidna.com.au/donate/

Some devices may take up to 2 minutes to respond.
Please be patient!

2. Manual installation of a custom recovery is tricky
In order to install Cyanogenmod I first need to have a custom recovery on the phone. I tried different versions of TWRP, CWM but almost all of them showed an error message ("Could not do normal boot") when I tried to boot into the Recovery mode and it went straight to the Download Mode.
The issue here is, as I found out later (see Spoiler above), that the phone is not a klte device. And almost all firmwares, roms and root instructions are made for the klte type of the Samsung Galaxy S5. But the G901F is  a kccat6 device.
I was finally able to find a working CWM file which I could flash with odin.

3. How to manually flash a custom recovery (CWM) on your G901F
Eventually I came across the following post in the XDA Developers forums: SM - G901F Rooted at last ! CWM Recovery in English !
Halleluja! With the downloadedable file (g901f-cwm-recovery-6.0.5.1(1130).tar) I was finally able to put CWM on the phone (and it staid there after a reboot, too).
Here's a step by step instruction:

3.2 Download and install the Samsung USB drivers (SAMSUNG_USB_Driver_for_Mobile_Phones.zip) from http://developer.samsung.com/technical-doc/view.do?v=T000000117. You should probably reboot your computer afterwards just to make sure.

3.5 Boot your phone into the Download Mode by pressing the following buttons altogether: Volume Down + Home + Power until you see a warning triangle. Accept the warning by pressing the Volume Up button. 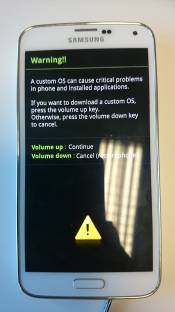 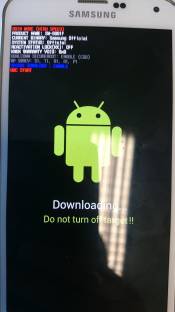 3.6 Plug your phone with the USB cable to your computer. In Odin the device should now be detected by showing the communication port in ID:COM. In my case this was "0:[COM8]".

3.7 In Odin, disable the "Auto Reboot" option. On the right side (Files [Download]) click on the "PDA" or "AP" button and select the previously downloaded g901f-cwm-recovery-6.0.5.1(1130).tar file. Then click on the Start button.
Odin will then display several log entries in the "Message" box. Wait until there is a green box "PASS" displayed above the communication port.
On your phone a blue bar should have appeared.

3.8 Disconnect your USB cable from the phone. Open your phone and take the battery out (yes, the phone is still running). Wait a few seconds and place your battery back in, close your phone.

3.9 Boot your phone into the Recovery Mode by pressing the following button combination: Volume Up + Home + Power. Keep it pressed until you see a small blue text appearing on top of the screen. 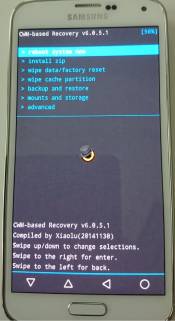 4. Installation of CyanogenMod - fail
Now that the custom recovery/CWM is installed and working on the phone, I proceeded to (finally) install CyanogenMod. I booted the phone normally and copied the current CM12.1 nightly (cm-12.1-20150702-NIGHTLY-klte.zip) and the Google Apps package (gapps-5.1-2015-06-02-15-19.zip) to the phone's internal storage. 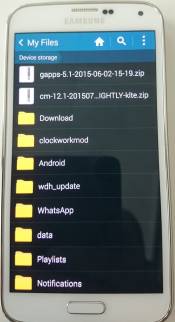 Afterwards I powered off the phone and booted into the Recovery Mode. 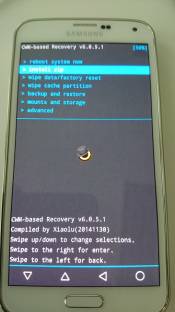 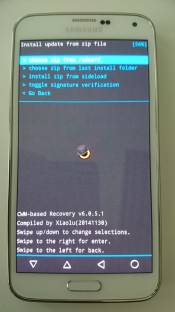 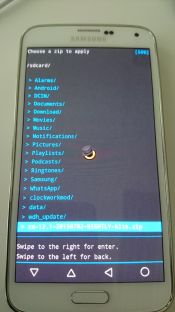 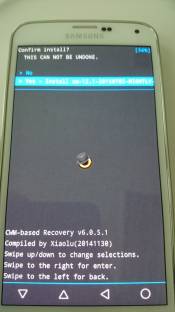 The following error message then appeared on the phone: 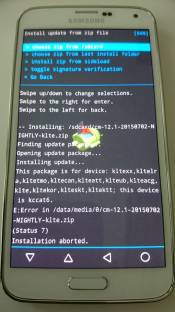 This is when I (finally!) found out that I have a Samsung Galaxy S5 Plus which isn't a klte device. Hence I could finally explain myself why so many trials to install a custom recovery failed.

Unfortunately to this day, there is no CyanogenMod version for this device (kccat6) available. A forum thread exists where you can add your demand: http://forum.cyanogenmod.org/topic/104658-samsung-galaxy-s5-plus-sm-g901f/

But at least now I'm prepared with CWM if CM ever comes to this device.

Additional notes: A working tutorial how to root your G901F can be found here: http://androidxda.com/root-samsung-galaxy-s5-lte-sm-g901f

LethalRabbit from Netherlands wrote on May 25th, 2016:

Holy crap, you have no idea how much you have just helped me. I have the exact same phone as you and my troubles started when I was trying to flash a copy of twrp recovery. I tried dozens of recoveries and I figured I was just screwed, until I stumbled upon this post.

Thanks so incredibly much!

As long as its the same phone model, it should work.

My phone has a different built number than the one mentioned in the root guide:
http://androidxda.com/root-samsung-galaxy-s5-lte-sm-g901f

Do you think it will work?