Six years ago I bought my first tablet: A Sony Xperia Tablet Z LTE. I even wrote an article about it, see Remote SSH work on Android tablet with ConnectBot and physical keyboard. Six years have passed and meanwhile the tablet's usage is reduced to entertain the kids. As long as the tablet still works fine, it still reacts relatively fast for the tasks it has to do and the battery life is still OK, I continued to use it. However one major issue was bugging me for a while: The Android OS is heavily outdated, running Android 5.1 (Lollipop). Newer releases were not pushed by Sony anymore (end of life product) and since Android 5.1's release a lot of vulnerabilities, including major ones (BlueBorne for example), were discovered. Using the device in public would be a risk. Time to see if a custom Android ROM can be installed.

As it turns out, the LineageOS project (a fork of the now dead CyanogenMod project) officially supports this tablet. And Sony allows to unlock the bootloader of the tablet (kudos to Sony!). So it's not only possible, in my eyes it's encouraged!

This article is a step by step guide how to install a custom recovery image (TWRP) and a custom Android ROM (LineageOS) on the Sony Xperia Tablet Z.

I've already done a couple of guides for other Android devices (see Android tag) so this step-by-step guide follows the same procedure as the others.

Warning: Installing a custom recovery image on the Sony Xperia Tablet Z will void the warranty.
A custom Android ROM is not officially supported by Sony and there can be bugs.
You will lose all your data on the phone. Make a backup of your pictures, videos, etc.
You're doing this at your own risk, this tutorial is only showing how it is possible. I'm not encouraging anyone to take these steps. You're responsible for this and in case something breaks then you're on your own.

Which Xperia Tablet Z device do you actually have?

This may sound like a stupid question, but it's very important that the correct model of the tablet is known. There are two different versions available:

This guide applies to both device types, however downloads for TWRP and LineageOS must be adjusted. In my case I own the LTE edition; therefore I downloaded the packages for the pollux device.

Install requirements (adb and fastboot) on your computer

adb and fastboot are programs used on the command line to access and manipulate an Android phone/device. They exist on multiple OS. I personally use Linux Mint on my desktop computer and both programs can simply be installed using apt:

Enable USB debugging on the tablet 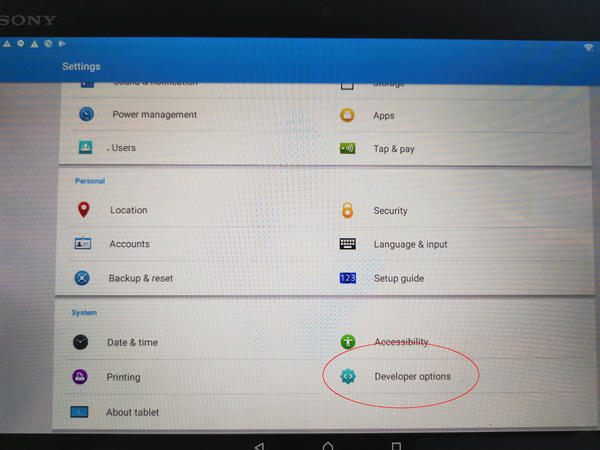 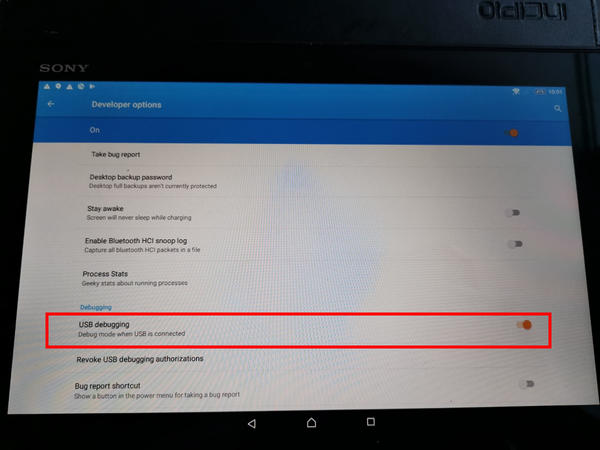 Preparations to unlock the bootloader

Open the Contacts app and open the app's Settings. 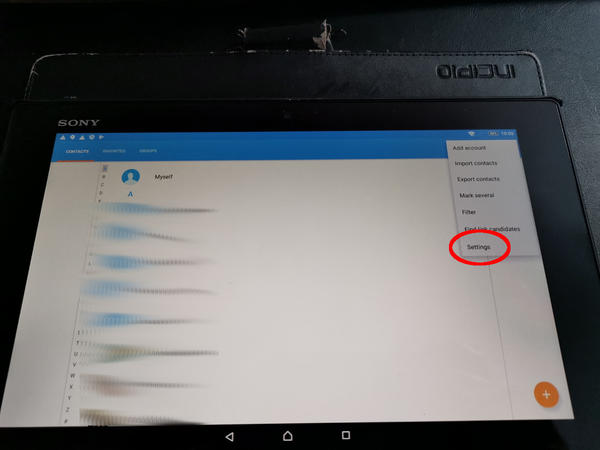 With your finger tap and hold for about 5 seconds just above the navigation menu (at the bottom): 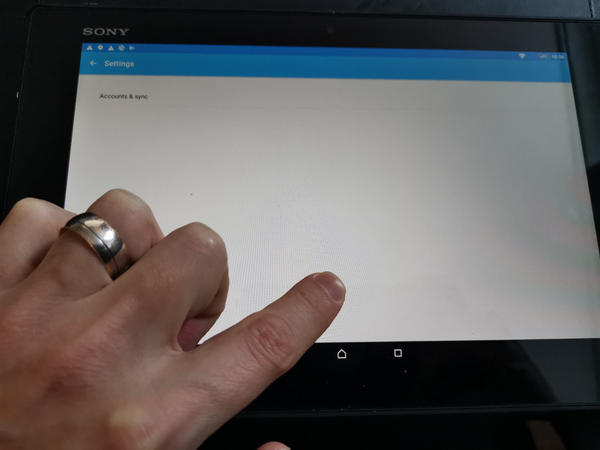 When you release your finger, a field with "Enter service code" should appear: 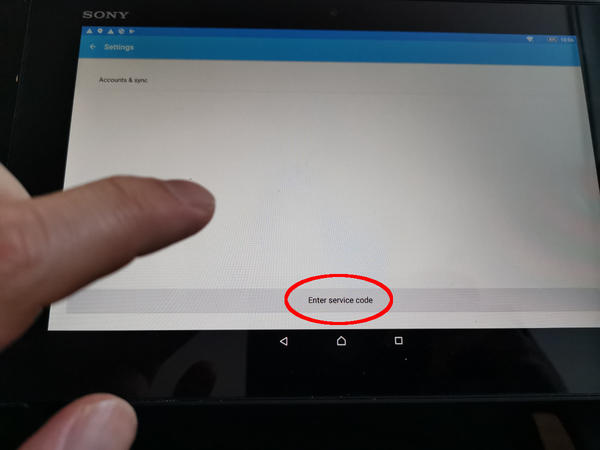 By tapping on this "Enter service code" field, a dialer (num pad) will show up: 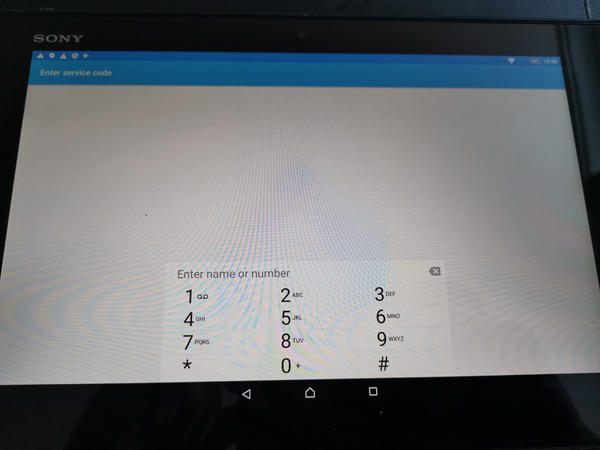 In this service menu open Service info -> Configuration and check the "Rooting status". 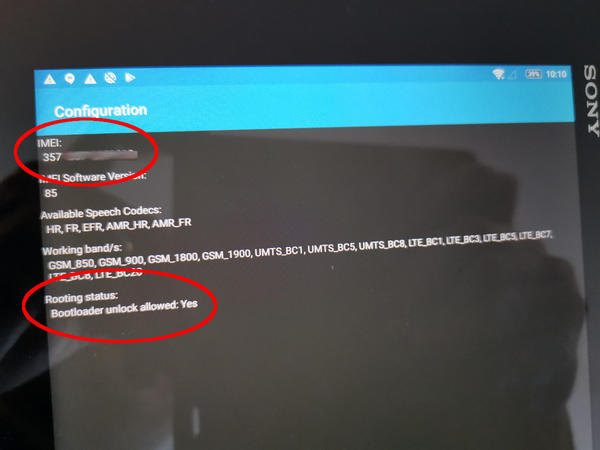 The value of "Bootloader unlock allowed" should be set to Yes. If this is set to no, you cannot proceed. While you're here, take a picture of this screen or note down the IMEI number - you will need this later to unlock the bootloader.

Now connect the tablet to your computer using a microUSB cable.

The tablet should now be seen using the adb command. Make sure adb is able to detect your tablet:

Note: It may be necessary to disable the "USB Debugging" in Settings -> Developer options and then re-enable them again. I had to do this on my tablet, otherwise adb was not able to detect any device.

Now that adb is able to see the tablet, launch adb reboot bootloader to reboot the tablet and to boot directly into the bootloader:

Looking at the tablet, there is no hint that it has booted into the bootloader. The screen is just plain dark. Only the blue LED next to the power button indicates the tablet is running. To verify if the bootloader is correctly loaded, use fastboot to find the device:

With the tablet still connected to the computer and detectable with fastboot, go to the Unlock Bootloader page on the Sony developer website. At the bottom of the page, select your device (Xperia Z Tablet) and then enter your IMEI code. 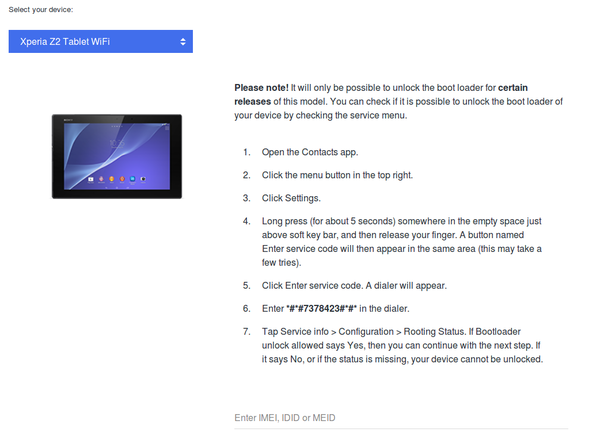 Accept the acknowledgements and submit. You will receive an unlock code: 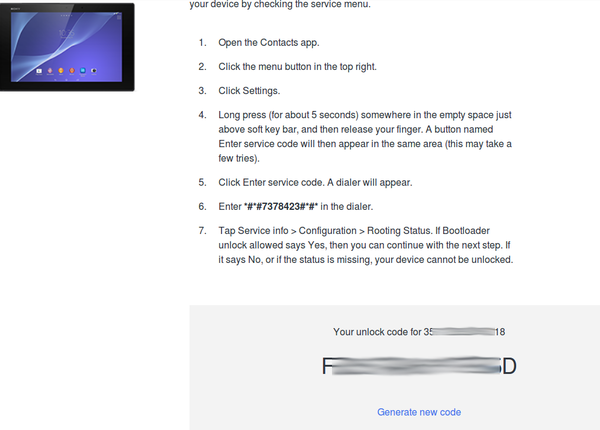 This unlock code can now be used with fastboot:

To install a custom recovery, TWRP is recommended. You can download the image from "TWRP for pollux" or "TWRP for pollux_windy" (again: Chose the correct version for your device or it won't boot anymore if you install the wrong version!).

Note: Download the img file in the browser, do not use a command line tool like wget. I did that and only got a ~7KB file, resulting in an invalid file.

Once downloaded, use fastboot to flash the "boot" partition and overwrite it with the just downloaded TWRP image: 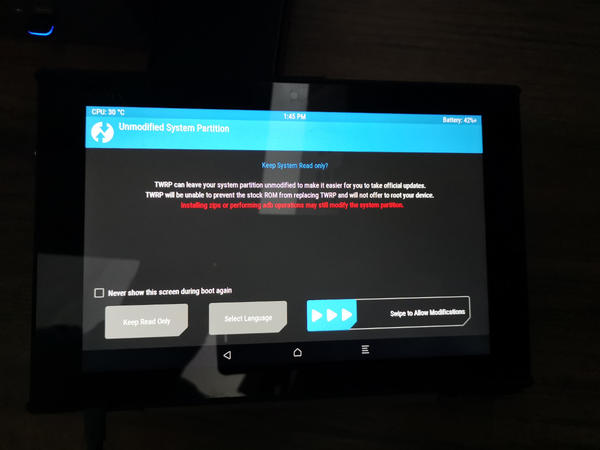 Now booted in TWRP and still connected to the computer, adb should see the device:

Push the recovery image to the tablet's memory:

Use dd to overwrite the tablet's own internal recovery:

The tablet is still booted in the TWRP recovery and still connected to the computer at this point. Now it's time to download the LineageOS for your Sony Xperia Tablet Z! 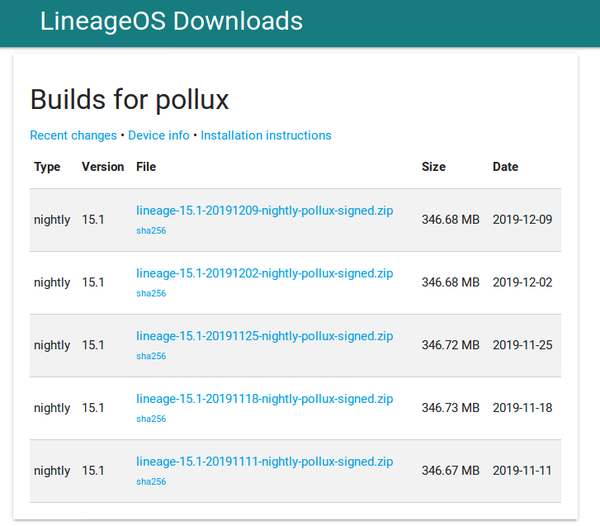 As of this writing I downloaded LineageOS 15.1 (= Android 8.1), nightly build from 2019-12-09. It's also a wise idea to download all the Google Apps which include important packages such as Google Play. The bundle can be downloaded in several variants using OpenGapps. 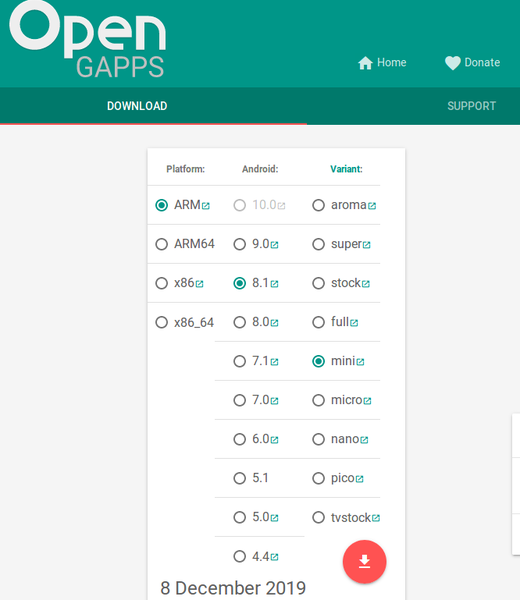 I selected the ARM platform (important for this tablet device!), Android 8.1 and the mini variant.

Once downloaded, there should be two zip files:

These files can now be copied to your tablet's SD card (which should appear in your file explorer): 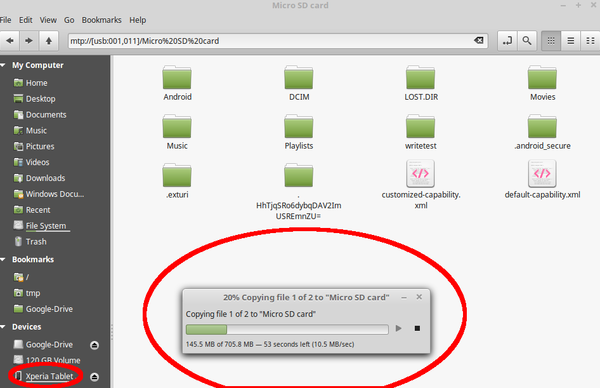 In TWRP make sure you are able to see the now copied zip files. Use Advanced -> File Manager and select "external_sd" from the list. The zip files should be shown: 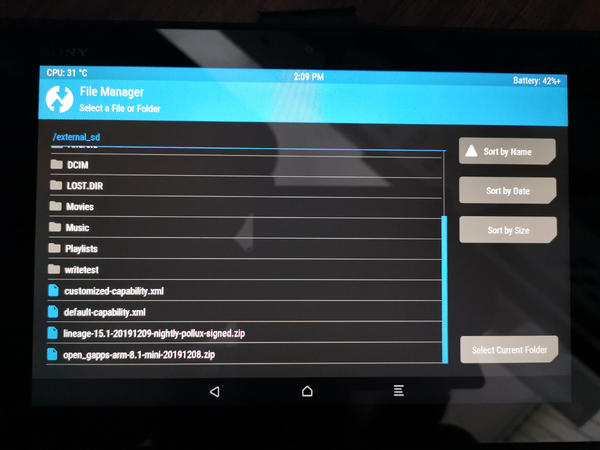 Data wiping and formatting in TWRP

Back in the main menu of TWRP, select Wipe -> Format Data. This will erase the internal memory including the stock Android version from Sony. Type "yes" to confirm data wiping: 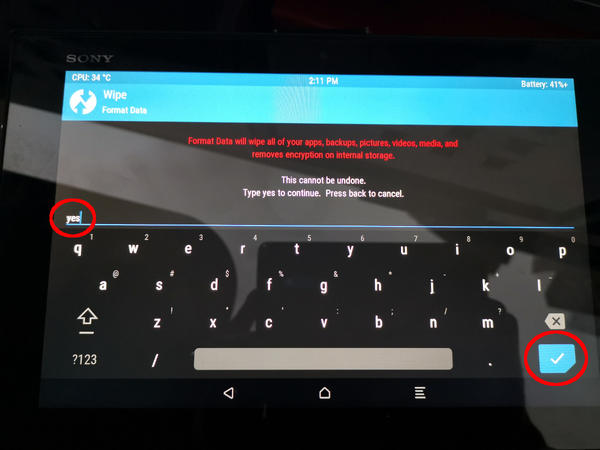 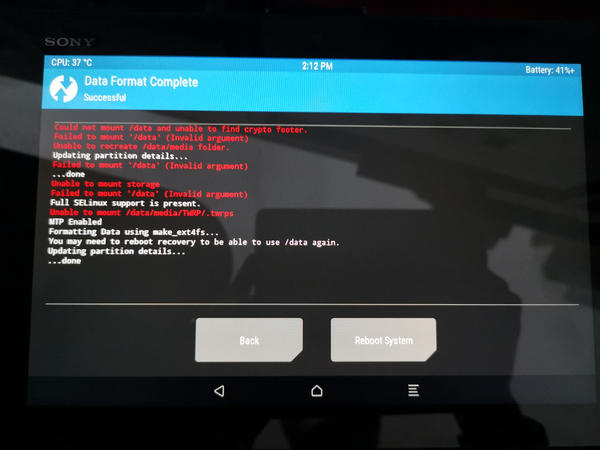 Once completed, use "Back" and use the navigation "back" key to return to the "Wipe" menu. This time tap on "Advanced Wipe". Select "Cache" and "System" partitions and then use your finger to swipe the bar "Swipe to Wipe" to the right. 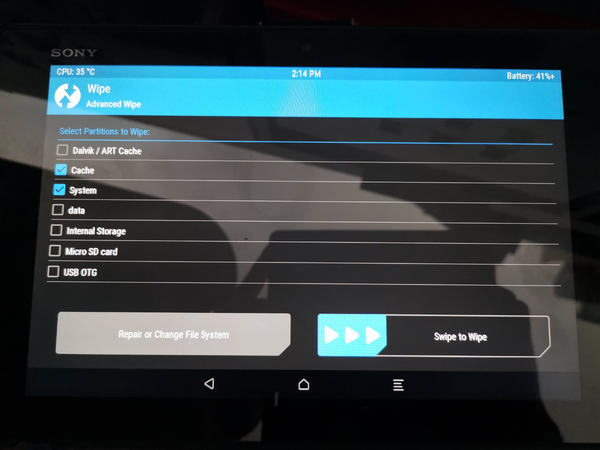 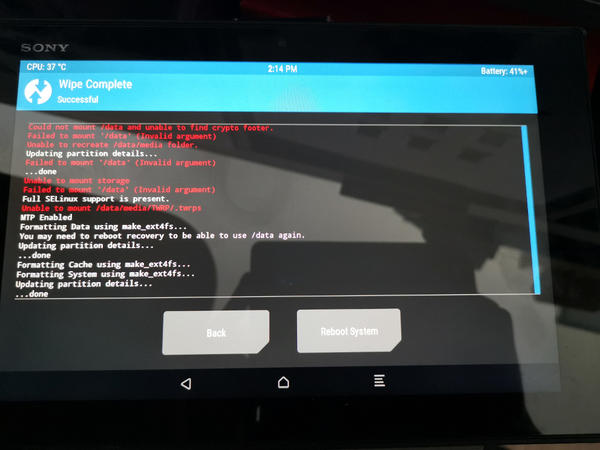 Once completed, return to the main menu of TWRP.

Installation of LineageOS and GApps in TWRP

Back in the main menu of TWRP, tap on "Install". To select the external SD card, tap on "Select Storage" and choose the microSD card. 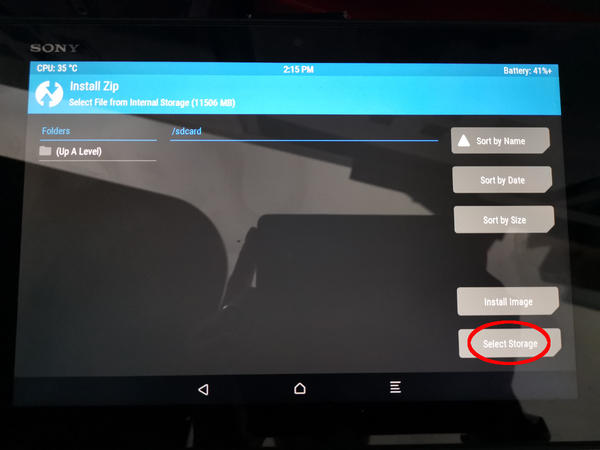 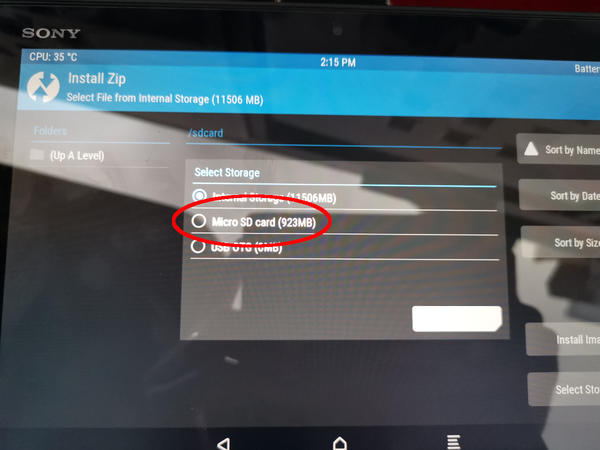 The two zip files (LineageOS and GApps) should now be shown: 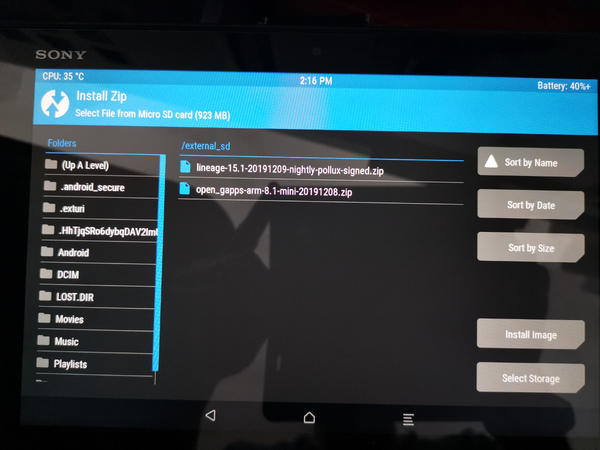 Tap on the linage zip file, TWRP will ask if you want to install this file. Swipe the bar to the right to confirm: 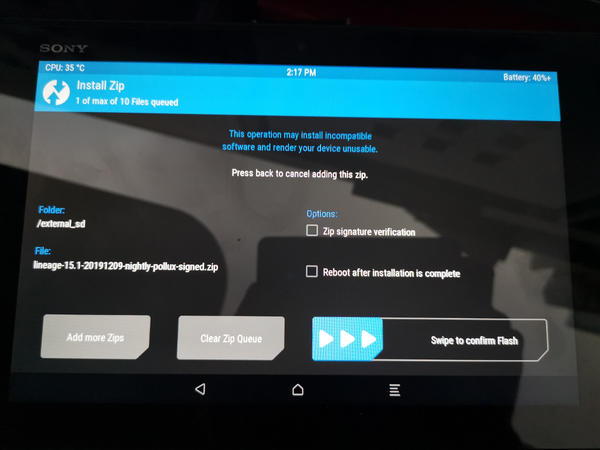 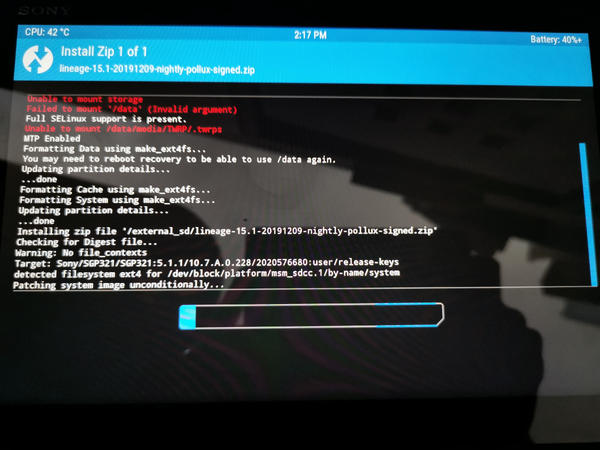 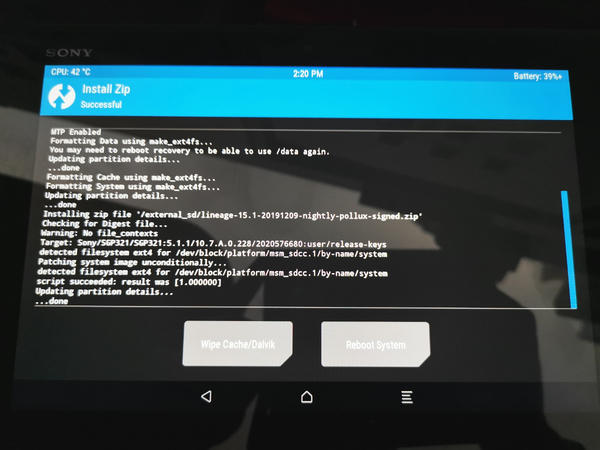 After the installation, tap on "Wipe Cache/Dalvik" and confirm. Afterwards use the back button in the navigation menu at the bottom to go back to the file explorer (Install Zip) and this time select the open_gapps zip file. As with the previous zip file, swipe to confirm the installation. 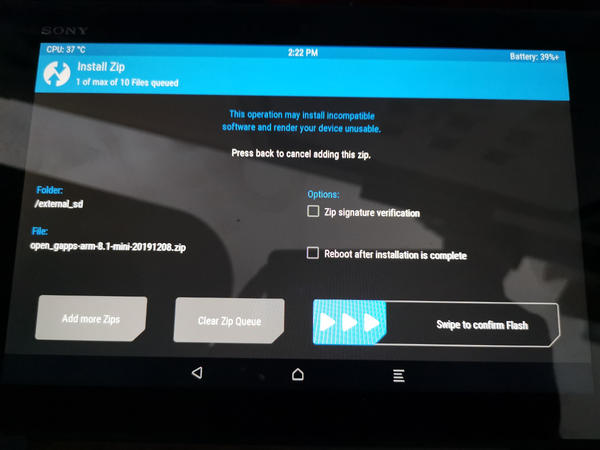 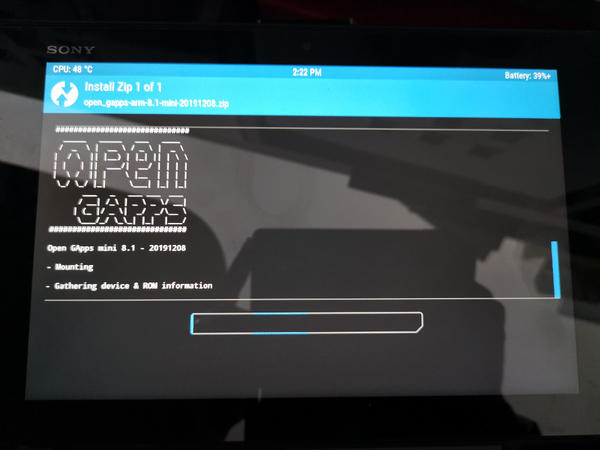 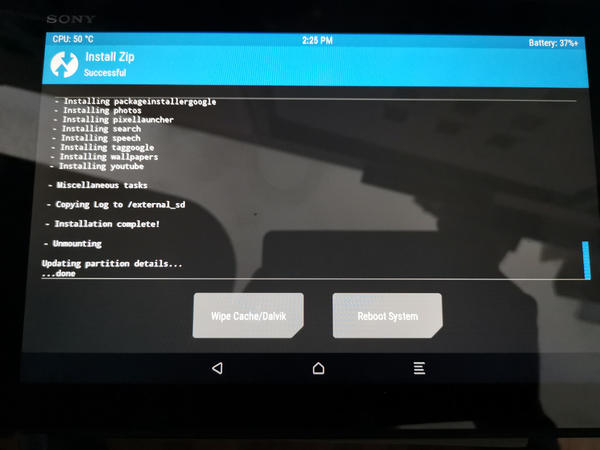 When the installation completes, tap on "Reboot System". TWRP asks if it should be installed as an official app. Swipe to the right to do so. 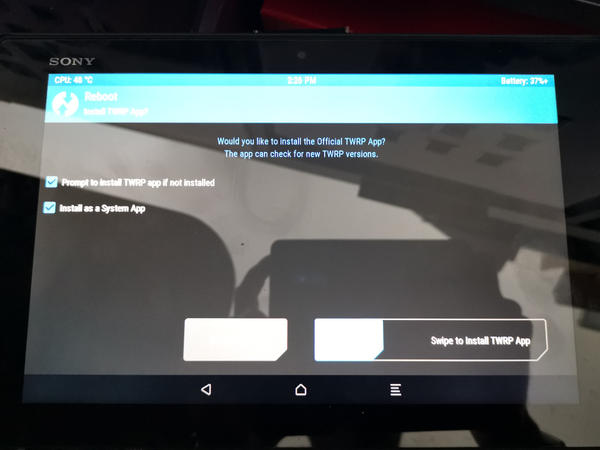 The tablet should now reboot and LineageOS should start. 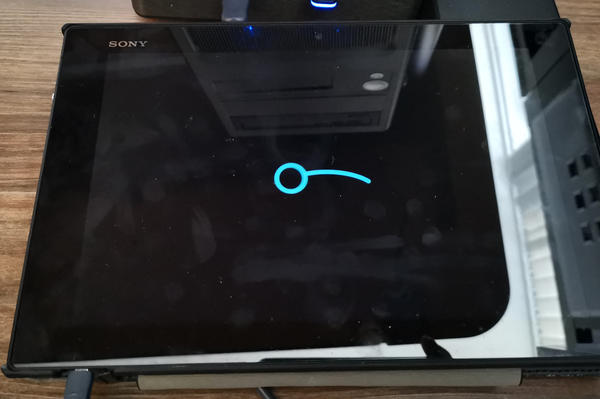 The first start did not boot LineageOS successfully. The loading animation kept on going for over 30 minutes. I forced a restart of the tablet (see How to force a hard reboot your Sony Xperia tablet or phone) to then start the device again. This time the LineageOS startup worked. 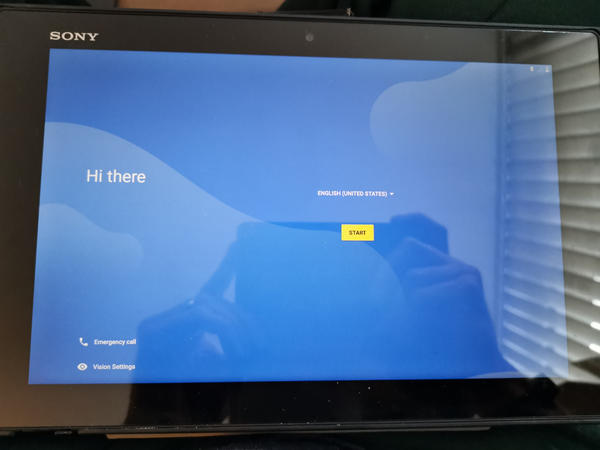