Nowadays, most of the things that we do - whether they be for school, work, or recreation - involve working with a laptop or a desktop computer. And we can all agree that nothing is more annoying than a slow laptop that takes ages to boot and load. Fortunately, there is a fool-proof and affordable way you can speed up your laptop, and that is by replacing your hard drive with a solid-state drive (SSD).

Hard disk drives (HDD) contain a circular disc - known as the platter - which stores your data. The spin of this platter dictates how ‘hard’ your HDD works, which in turn, affects how fast your operating system responds and how long it takes installed applications to load and open.

A solid-state drive (SSD) is pretty much like a hard drive, only a lot faster. But instead of spinning platters and reading/writing heads, SSDs use non-volatile, semi-conductor memory chips to store your computer’s operating system, programs and data files. Non-volatile memory allows data to stay put even if your device loses power. SSDs come in various types depending on their shape and size, as well as speed, storage capacities and even thermal output.

As of 2020 there are two very common SSD types used: SATA based drives aiming to directly replace a HDD and NVMe based "chip-cards" which connect to a M2 connector on the motherboard. The following picture shows a good visual comparison between these two SSD types: 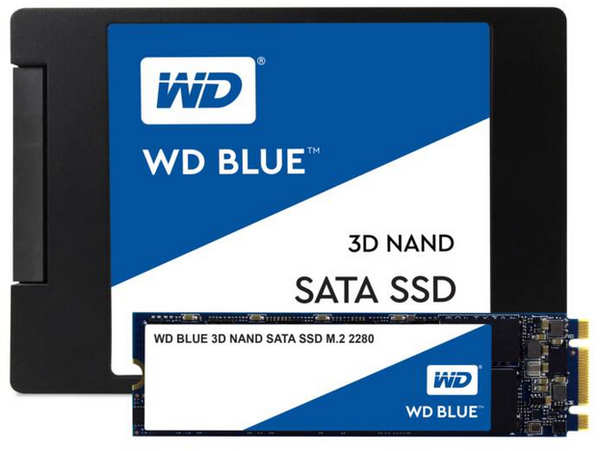 Why should you switch to an SSD?

There are many reasons to why switching to SSD is a good idea. For one, an article by The Guardian emphasized that swapping a hard drive for an SSD is a good and cheap way to extend the life of your PC. Generally speaking, HDDs are only good for three to five years while the best SSDs can last up to ten years (depending on the amount of write cycles). Upgrading to SSD is also a great way to speed up your PC without spending too much money. Since SSDs use microchips to store data and don’t have any moving parts, their speeds aren’t dependent on RPMs (physical rotation speed of a hard drive), but on the technology and data connection of the drive. This then results in faster booting, app launching and running, and transferring of files.

Compared to a hard disk drive (HDD), SSDs are much smaller and compact, which also allows laptops to be thinner, lighter and easier to transport. However, in exchange, storage capacity is compromised (as of now, but SSDs are catching up, fast). When it comes to energy consumption, HP’s discussion about SSD vs. HDD highlighted that SSDs use only two to three watts. This is one half to one-third less power than the six to seven watts HDDs use. Since SSDs have no spinning disks, they are also less fragile and more likely to protect your data from shock damage in the event of an accidental drop. They also don't produce that much heat as of a HDD - again, they don't have any mechanical spinning parts creating head emissions. This also has a positive effect on cooling your desktop or notebook - ergo again less energy consumption!

In sum, SSDs offer faster processing, better application performance, lower energy consumption and greater durability. All these make SSDs a better option over HDDs for most people. And: They're getting cheaper by every month! So, how do you install this exciting technology into your PC or laptop?

How to install an SSD?

If you're migrating from an existing HDD to a SSD, the migration begins with transferring your data and operating system to the new SSD drive. A very handy way is to use a USB-based SATA adapter or enclosure, as I also mentioned in article Hard drive to SSD upgrade on a HP 250 G5 notebook. This method is also mentioned by other tech sites (Life Hacker's guide on installing an SSD for example) because its easy, fast and (mostly) painless. This method allows to run your existing HDD and your new SSD in parallel and use data migration tools (I personally booted a Linux Live image and used dd to transfer the whole drive) to do the job. Of course there are many other helpers around, even "clickable" data migration software (Acronis is a long-lasting name for disk migration tools).

The next thing to do is to open your desktop PC or notebook and pull out the hard drive (yes, this is by far easier to do in a desktop computer than in a notebook, but there are many guides online which describe how to correctly open a notebook, including video guides). In doing so, remember to safely store all the screws and carefully lift the HDD. You can now remove the SATA connection from the HDD and attach it to the SSD. Then place the SSD where the HDD used to be and proceed by fixing the SSD with the screws and then putting the case back.

After all this is the easiest way to quickly change from HDD to SSD as both use the same SATA connector, available on all motherboards and supported by all Operating Systems: