Logs on the slave servers clearly showed that there is a newer SOA serial available on the master:

The PowerDNS logs further revealed that a transfer (AXFR) from the master (18.xxx.xxx.xxx) is not possible:

But in short, there are a couple of minimum configurations to make a master slave replication work:

Using this knowledge, the configurations of both master and slaves were verified but everything was configured correctly:

Why then would the transfer not work anymore all of a sudden? 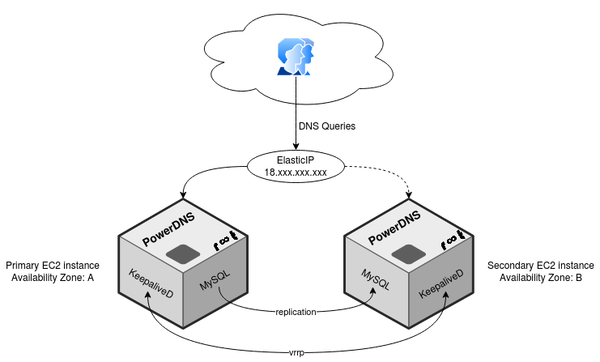 To be able to "balance the public IP" over to the secondary EC2 instance, an Elastic IP was configured. To do an automatic failover of this Elastic IP, Keepalived is used in a MASTER/BACKUP setup. But instead of using a virtual IP address (which would not work with an Elastic IP), a local shell script would be executed. This shell script connects to the AWS API and re-assigns the Elastic IP to the current VRRP master.

With this knowledge in mind, the troubleshooting could proceed.

Manual notify on the master

To be able to see what's happening "live" in the logs, a DNS notify was manually triggered on the master server. This should inform all the slaves (or more correctly: all the nameservers behind a NS record for this zone) of the used zone about changes:

Where does 54.93.xxx.xxx come from? That's not the static Elastic IP used by the master...

Back on the DNS master on AWS, the outgoing (SNAT) IP address was verified using curl:

The puzzle pieces slowly came together! The primary EC2 instance did not use the Elastic IP as SNAT/outgoing IP address anymore! After the keepalived script was executed, the Elastic IP was re-assigned again:

And the SNAT IP address went back to the Elastic IP:

Why did this happen?

The good news: The Elastic IP failover did not cause any downtime (yet if it would have, monitoring would have alerted immediately). But the question remains: What did trigger the failover?

According to the graph, the failover happened on August 8th at around 9pm. That's definitely outside of our office hours so a human interaction from one of the administrators can likely be ruled out. Finally the following syslog events were found with journalctl on the primary EC2 instance:

And on the secondary EC2 instance:

So what happened is that the secondary EC2 instance (dnsmaster2) became a master - for no obvious reason. No indication of a failed keepalived health check on the primary instance either. When entering the MASTER STATE, the mentioned shell script is launched which re-assigns the Elastic IP. But when dnsmaster2 switched back to BACKUP state in the same second, the primary instance (dnsmaster) did not switch the state (it did not even change to BACKUP state). Hence the master.sh shell script was not executed and the Elastic IP remained assigned to the secondary EC2 instance.

So the big question is really: Why did KeepaliveD switch the state on the secondary instance but not on the primary? One possibility could be that the network connection between the availability zones stopped working for a very brief moment and the VRRP communication using the internal IPs did not work anymore (also see this question on serverfault). Another hint can also be found in a currently still open issue in the KeepaliveD repository on GitHub (Repeating "Received advert with lower priority 103, ours 104, forcing new election"). Here, the possible explanation points, once again, to a network problem:

The reality is that keepalived, or more specifically VRRP, can only work reliably if the network between the various systems running keepalived is itself reliable, and it appears that intermittent problems of a backup instance becoming master when the master is still running are quite a good way of identifying that there are network problems.

But as this problem occurred inside AWS cloud, it is unfortunately impossible to find out exactly what happened in this second. One just needs to rely and "trust" the cloud in such setups.

How to prevent this from happening again

By checking the public IP address, as shown above with curl, it can be verified that the Elastic IP is assigned to the primary EC2 instance. This can be used by the monitoring plugin check_http. In this example, check_http makes a request to icanhazip.com (or basically to any other public IP lookup) and checks for the string "18.xxx.xxx.xxx" to identify its own Elastic IP. The check will fail if the string is not found in the response.

As soon as the Elastic IP is detached from the primary EC2 instance, this check will fail and alert the administrators in charge.