In a recent article I described how to record films or series from TV using Tvheadend on Kodi/LibreELEC. As the episode we were about to miss was correctly recorded and saved as a Matroska video file (mkv), it was time to catch up. I felt like a hero to present the recording to my wife: "See - there is at least one benefit of having married a geek!". I said it too fast.

Audio and video are not in sync!

Once the recorded file was launched in Kodi and the episode started, it only took a couple of seconds to realize: There's an audio/video sync issue. The sound seemed to come before the corresponding image (the video stream seemed to lag behind). It even became worse with every additional second. The longer the video was playing, the bigger the lag between audio and video was.

However, whenever the video was paused and then played again, audio and video were in sync again - for a few seconds until the same happened. Impossible to watch the recorded episode like this!

Interestingly this only happened, when the recorded episode was played within Kodi. On the computer the video was perfect; no audio/video sync issues there.

On my research why this happens, I came across an old Kodi forums thread (MKV playback out of sync) which mentions similar problems. The thread was not marked as resolved, but the given advise sounded like a good hint:

It's in Kodi. Settings>video>playback>adjust display refresh rate to match display.

The additional link to another forum thread (Adjust Display Refresh Rate vs Sync Playback to Display) showed an outstanding explanation of these settings by the user "noggin":

"Adjust Display Refresh Rate" will switch the output refresh rate when playing back a file to the best refresh rate that is supported by the display AND the hardware Kodi is running on (as reported by EDID) If you don't select this option then you output at a fixed display refresh rate, which is usually set in Settings->System->Video Output. This setting allows Kodi to change the frame rate of the video output fed to the display, to ensure the best refresh rate is selected.

"Sync Playback to Display" is different. It alters the playback speed so that it matches the display refresh rate (which could be fixed or could be variable if you have also selected Adjust Display Refresh Rate)

Why is this useful?

Say you have a 50Hz display but 24p content. 24p content will look horrible if you play at 50Hz, but if you Sync Playback to Display it will play the 24Hz back at 25Hz which will look much nicer at 50Hz. (Even if you have a display that syncs to 60Hz and could watch 24p material with 3:2 - which is nicer - you may still chose to watch at 50Hz with speed up and 2:2 to avoid the 3:2 judder. I sometimes do.)

Also - if you have a Kodi platform that can't cope with 23.976Hz output, but it can cope with 24.000Hz, you would normally get a repeated frame every 40" or so to keep stuff in sync. However if you also select Sync Playback to Display then Kodi will slow speed up the 23.976Hz content to 24.000Hz - so no repeated frames (and thus no stutter) but you then have to sort the audio sync out (either by resampling or by dupe/dropping)

OK - a couple of hints pointing towards the Display Refresh Rate. 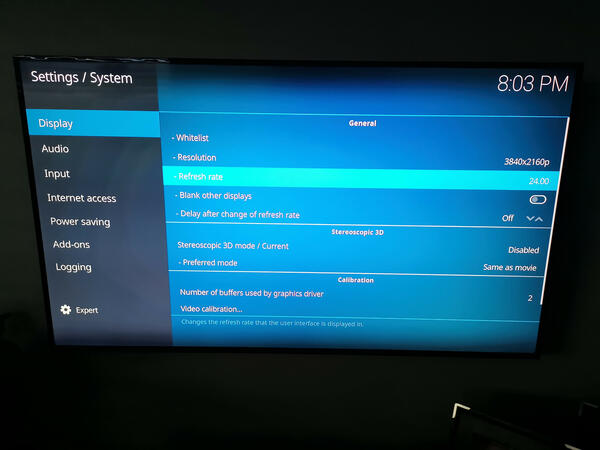 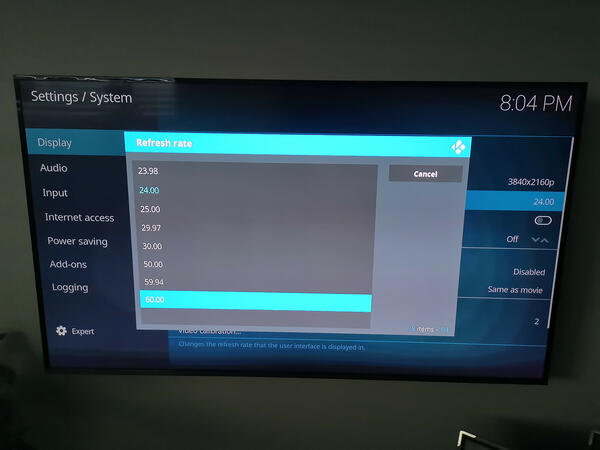 To my big surprise, the fixed refresh rate was set to 24 (Hz), which seems to be a default value. As my TV (Samsung UE55KU6400) can cope with a much higher refresh rate, I changed to the highest available value: 60 (Hz). 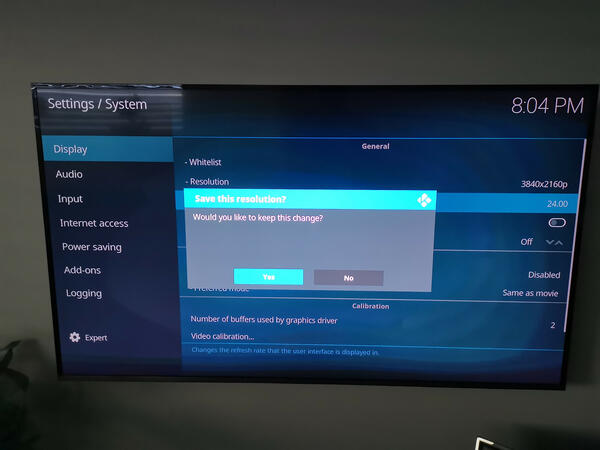 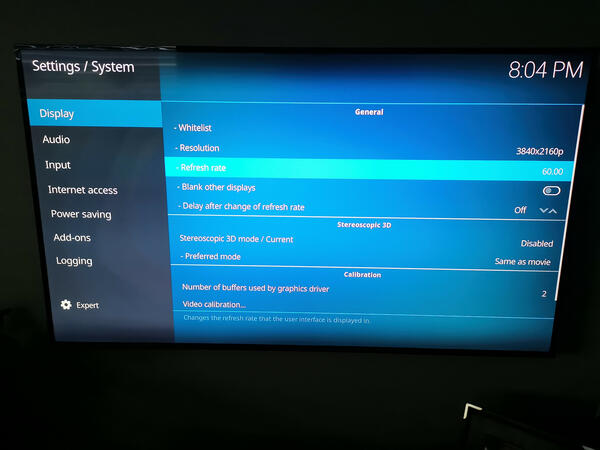 Right after this change, I continued to play the recorded episode and YIPPEE-KI-YAY it worked! The audio/video sync was perfect now!

Issue was fixed - the geek restored his power. But the question remained: Why did this happen only now? On this particular video file?

Surely this wasn't the first time we watched a video on Kodi. We watched all our family videos streamed by Kodi so why all of a sudden are these sync issues there? It was the first time I did a DVR (digital video recording), so that surely must have something to do with it.

With mediainfo I verified a couple of the recent videos we've watched on Kodi and the video frame rates on all of these files were either 23.976 fps or 24.000 fps. And what about that particular video file I recorded using Tvheadend?

As Kodi was set to have a fixed refresh rate of 24 Hz/fps, it was unable to cope with a video file of a higher fps rate! Therefore the video stream seemed to slow down with every further second, while the audio stream played correctly - hence the sync issue.