Yesterday was finally the day: Hardware upgrade of my main workstation!

Hard to believe, but parts of this hardware setup was in use since 2011 (!!!). I mentioned the hardware components 10 years ago in an old blog post (Testing some Swiss Online-Shops for Hardware Upgrade):

In 2013 memory was upgraded to 16GB and in 2015 the Seagate drives were replaced by two Samsung 850 EVO solid state drives. In 2018 I fully switched to Linux Mint on this workstation. But motherboard and CPU were still in use. Until yesterday. 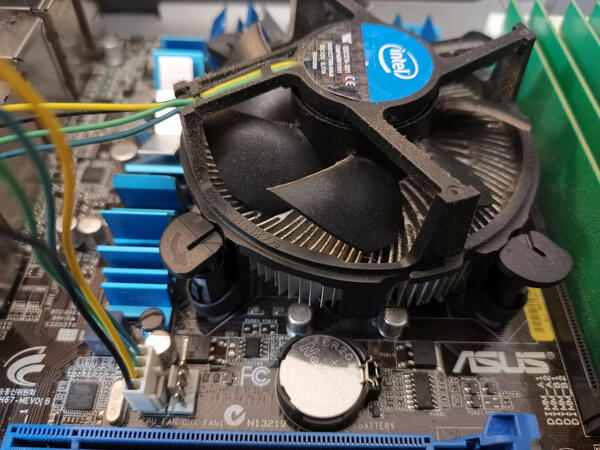 The old hardware specs are shared on linux-hardware.org.

To measure a difference in performance, a benchmark was performed using s-tui and geekbench. With s-tui (which uses stress in the background) I was focusing on the actual power usage of the whole machine. It peaked at around 145W after 2 minutes of s-tui running in stress mode. In IDLE mode (just a browser opened without doing any actual work) the power consumption was at around 85W. The geekbench result for the old hardware components: 668 Single-Core score and 2267 for Multi-Core score.

Why upgrading the hardware? Was Linux getting slow on this old hardware setup? Actually no. Linux Mint (meanwhile at 18.3) was running just fine on this 10 year old setup. Probably thanks to the SSD upgrade a couple of years ago. But whenever I needed to start up a virtual machine with Windows 10 running in it, it basically killed my whole physical machine.

Another problem was that my third SSD (used for VMs and backup) was connected to a SATA 2 connector. The P8H67-M-EVO motherboard only features two SATA 3 connectors, which are obviously used by my two main SSDs in a RAID-1. And with increasing video conferencing in the last years (especially in 2020) my machine often started to heat up (you could literally hear the fans).

Time to do an upgrade. Besides, it's been a while since I did some hardware work, something I like to do from time to time. 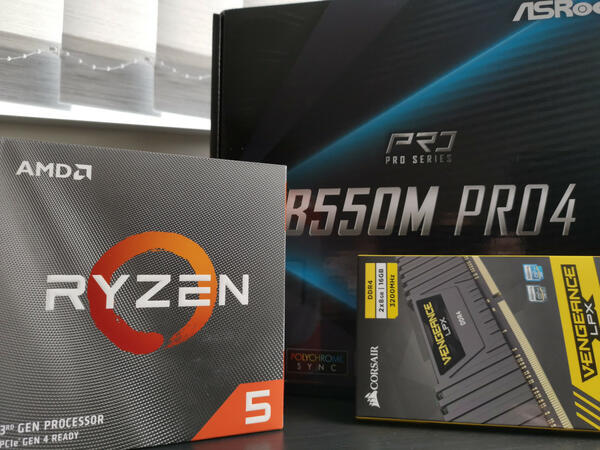 I am still continuing to use the current SSDs.

The biggest challenge would be whether the B550M Pro 4 (with an AMD B550 chipset) would be supported by the Linux Kernel. Before actually buying the motherboard I came across a couple of issues that B550 chipsets would cause problems with Linux. However recent Kernel versions (starting from 5.7) added a lot of fixes and better hardware support for newer AMD hardware. So I decided to first upgrade the current Linux Mint 18.3 to the newest version (20.1 as of this writing), and then install a newer HWE (Hardware Enablement) Kernel.

On my road to Linux Mint 20.1 I experienced one weird behaviour after the upgrade from 18.3 to 19.0: Suddenly all text in the display manager (lightdm) disappeared. Only "boxes" were shown instead of actual characters. This could be solved by regenerating the font cache (see links before).

And tested a successful reboot.

Then it was time to remove the old components and use the moment to thoroughly clean the chassis (and PSU). 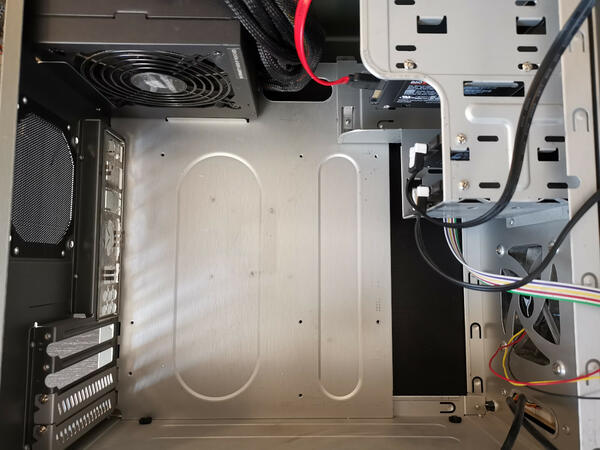 Putting the components together

It's always fun to work with hardware components - at least every once in a while. Installing the Ryzen CPU on the motherboard is very easy, installing the cooler was working great with the screws (I did not like the old "push-down" screws from Intel). 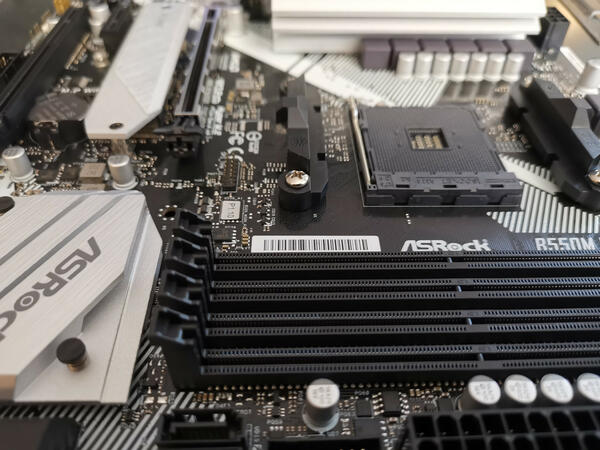 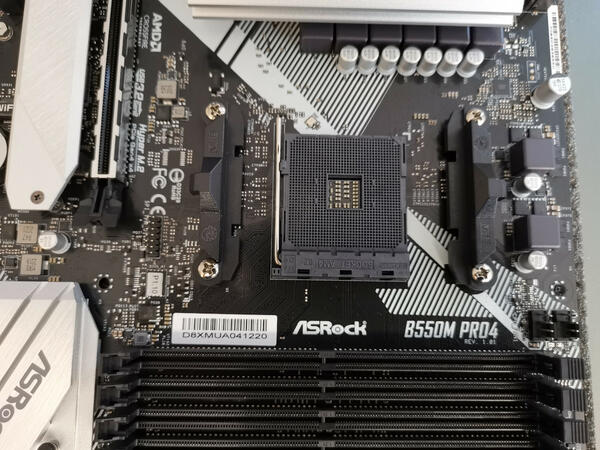 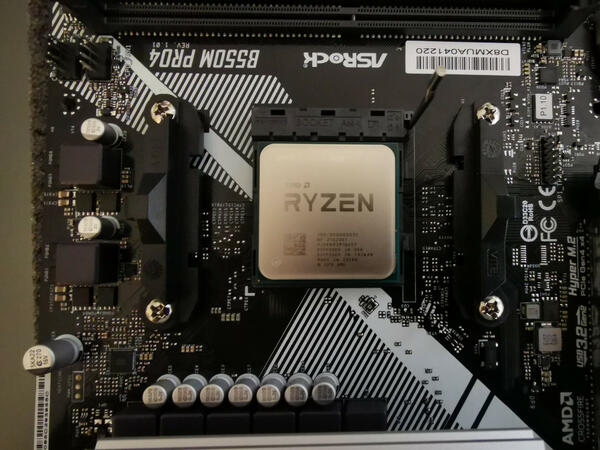 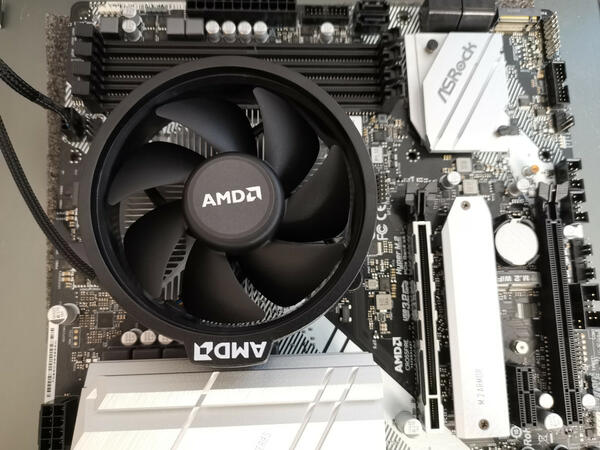 Then went on and installed the memory DIMMs. As I only use two DIMMs for now I had to install them on the second and fourth slot (seen from the CPU), as the motherboard installation guide mentions:

After everything else was connected to the new motherboard, it was time to boot the machine.

The very first boot took a while until something was actually shown on the screens. I guess something as a "first boot initialization" happened on the motherboard. But eventually grub was showing up and Linux Mint 20.1 booted up.

Once in Linux Mint 20.1 everything seemed to work - except the network card! I have read some hints that the Realtek card could cause issues, however on my research (using linux-hardware.org) I found plenty of Linux systems marking this card as "works". So I did what every first level supporter would ask you to do: Have you plugged it out and back in again? I did that and the NIC's LEDs began to blink. The network card is now up!

Note: On all the next boots, this "network card down" did not happen anymore.

Something else I noticed: The front fan (chassis) seemed to turn at a much lower rate. This could be because this fan only has a 3-pin cable yet the motherboard has a 4-pin connector. The 4th pin being for fan speed control. I went into BIOS and manually set the chassis fan to "Full speed" as I did not want to risk an overheat situation.

Besides these two minor things, everything works great (so far). Dual screen setup (using a dedicated MSI Radeon RX 580 GPU), HD Audio using the speakers, obviously keyboard and mouse and other USB connected devices (such as my Jabra head set).

Of course what would be a hardware upgrade without a benchmark comparison? I let again s-tui run for around 2 minutes and measured the power consumption. To my big surprise the power usage peaked to around 165W, which is 20W more than using the old components. I would have thought that the Ryzen 5 3600 with a TDP of 65W would save more energy. However when running in IDLE mode (again, just a browser open without any tasks) the power consumption was at 75W. That's 10W less which is not that much but still something.

The geekbench results are, as expected, higher than on the old hardware: 1291 Single-Core score, 6952 on Multi-Core score.

Now a few months later (August 2021), I just installed the Linux Kernel 5.11, which started to show up in the Synaptic Package Manager: 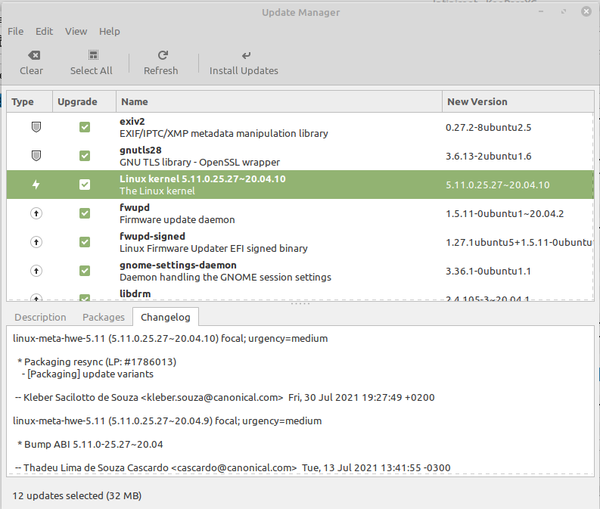 Rikster, I mainly focused on comparing the benchmark stats of the different CPU/Hardware so I did not do another benchmark after the Kernel upgrade.

So after you installed 5.11.0-25-generic what were your Geekbench Single/Multi Core scores ?